Share All sharing options for: Tracy, seriously, just shut up and play

T-Mac, I like you. I really do. I know it seems like a love-hate relationship because I get annoyed when you shoot too many 3s and not drive the ball to the hoop in the 4th Q. I know I've told you to stop sulking... and I mean it. But now you run the risk of completely losing credibility. You blame your shooting woes on the stadium now?!? I don't see Carl Landry or Yao or Luis Scola bitching about their 50+% shooting...

From USAToday - through the AOL Fanhouse - McGrady blames rims at the Toyota Center for the Rockets' shooting woes.

McGrady says the rims are not shooter-friendly - and hurt his team as much as they do opponents. Houston is shooting 43.4% from the field at home and 45.2% on the road."I really feel a lot of guys are not comfortable playing in this arena," McGrady told the Houston Chronicle. "It's not a good shooting arena for whatever reason."It's not just our guys. It's guys around the league. They hate our arena. Who was the last player to score 40 in our arena?"

Basketball Reference shows that no player has dropped 40 in the Toyota Center this year, but who cares? The game is about Ws and Ls, not about who scores 40 points by themselves.

Maybe if you'd stop shooting from 28 feet away when the other team is inviting you to try to dunk the ball, your shooting percentage would be better. Just a thought. I know it seems strange, but dunks are mathematically higher percentage shots than 3-point attempts. Look it up, it's true! 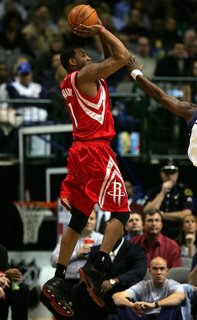 Just play ball, Tracy. Stop making excuses and go play. And try to have some fun while you're doing it.

oh, and to answer your trivia question, the last guy to score 40+ in the Toyota Center? Carlos Boozer during the playoffs last year. 41 points in Game 2. But the Rockets won that game. So, tell me again why scoring 40 is important??