We are here to stay - that means PLAYOFFS!

Share All sharing options for: We are here to stay - that means PLAYOFFS! 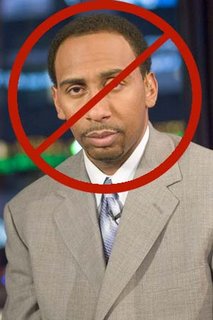 On SportsCenter last night, they put SAS on camera. For some unknown reason. Anyway, they asked him about the Rockets and the Yao situation. Considering how tough the West is, whether or not the Rockets can survive is a legitimate question today. That I understand. SAS's answer, however... I do not understand (and I am only slightly paraphrasing here):

MANY PEOPLE BELIEVE THE ROCKETS CAN STILL MAKE THE PLAYOFFS WITHOUT YAO MING. I AM NOT ONE OF THOSE PEOPLE. THE ONLY WAY THEY CAN WIN IS TO GIVE THE BALL TO TRACY McGRADY AND THEN GET OUT OF HIS WAY AND SHUT-UP!

(He then proceeds to give like 3-4 other reasons for how we can win, but hey, who's counting?)

I fail to see how Mr. Cheezy Doodles has any expertise on the Houston Rockets. I'm pretty comfortable saying I have a better feel for the team than he does.

Yes, we still have Tracy McGrady. NO - T-Mac should not be shooting 27 times a game for us to win. The Rockets have played soooooo much better when T-Mac is a distributor and seeks to get his teammates involved. If he wants to actually try a layup or two each night, I would not oppose.

Also, we still have a really good team. T-Mac is the cowardly lion in the 4th Q, but "Luis Landry" is not. Shane Battier is a tough character, too. Rafer sucks, but he's at least not afraid to shoot the ball. Bobby Jackson is a playoff tested veteran. Chuck Hayes didn't get his Chinese shoe contract by sucking. This team can (and will) win basketball games against tough competition.

Granted, the Wi--rds are not a good barometer for our ability. They are from the East, and teams from the East suck. I think this season has made that rather clear.

The Rockets are going to make the playoffs. We are going to win at least 50 games. Including the next one, which will give us a perfect February.