Share All sharing options for: "we came, we saw... we kicked its ass!"

Now that was an ass-kicking! 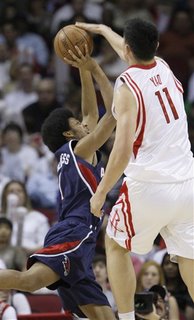 That picture is a fairly accurate representation of the Hawks' futility last night in attempting to beat the Rockets. All night the Hawks were off balance, taking bad shots, not passing the ball, not playing as a team... and constantly running right into the Great Wall of Yao.

From the moment of the tip-off, the Rockets were hungry, motivated and seemingly angry. After the first 6 minutes, Luis Scola was on pace for 40 points and 40 rebounds. Fortunately for the Hawks, Ricky held him back a bit in the 2nd Q and he didn't play much afterwards - but Scola still finished with 14 points and 9 rebounds. Imagine if the guy could actually make a free throw!

On the other side.......... not one single starter for the Hawks scored in double figures. "All Star" Joe Johnson finished with 8 points and a few nightmares of Shane Battier constantly being in his face. Josh Smith? One nice dunk and a ticky-tack "and 1" - but only 7 points total. Suck it. Marvin "I can't believe I was drafted before Chris Paul" Williams? 8 points on 12 shots. Complete non-factor. I think Yao ate Al Horford, because I never saw much of him.

Oh yeah, it was also "Aggie Night" at the game - because Acie Law IV was playing. Final tally? 8 ugly shots, 9 points and only 2 assists. Aaron Brooks (drafted 15 spots later)... I'm thinking the Rockets got the better rookie PG here. Even if one is a midget.

The domination was so thorough, Ricky didn't even have the heart to let Carl Landry stay in the game and gorilla dunk every possession. Two was apparently enough. Nice try there, Tyronn Lue... 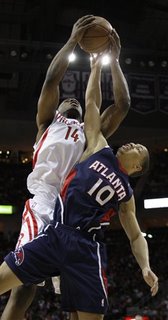 Rockets up by 30 something after 3 quarters.......... which led to the Steve Novak show. And it was excellent.

That's 6 in a row. Portland and Sacramento before the All Star break. And not for nothing, but we kinda called it. Here. And here. And here. This is what I wrote back in December:

But mostly, I am preaching patience. Just watch. By the All Star break (mid-February), at some point the proverbial light will go on for the Rockets. Maybe by then we will have figured out the point guard situation, how to properly use [Luis] Scola, and also how to properly harness Yao's increasing anger. Then we'll go on a late season run.

It's nice to see predictions come true. Lee's 60% of the way to reaching his.