Share All sharing options for: While I was away...

I haven't written anything in 4-5 days. Then again, it's going to be hard to top the Princess Bride moment of inspiration. Or Lee's President's Day post. Besides, after two birthday parties over the weekend plus a, um, eventful and drunken Valentine's Day - what else was there to write about?

Oh, yeah, the All Star game.

I guess I should do a token analysis. We did have a few players there. I can't figure out what Dikembe was doing there though. Other than cheering for every dunk, even the ones that suck. Gotta love the cookie monster. 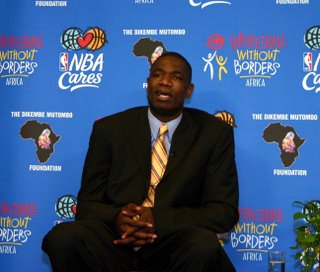 The Dunk Contest. Yeah, Dwight Howard was impressive. The self-alley-oop off the backboard. The behind-the-backboard left handed dunk. The little basket prop. And the non-dunk Superman Dunk. All insanely impressive.

Gerald Green had two impressive dunks as well. But he showed a complete absence of anything resembling charisma. Except for that "Houston" tattoo he has.

The contest itself was sorely lacking in this though: 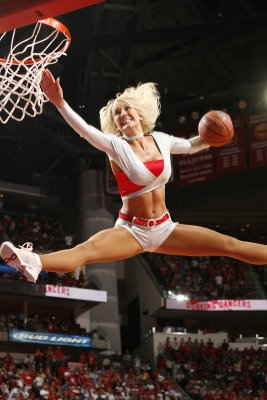 Dunking Power Dancers. You can't beat that Dwight.
But you have proven that you can knock them up!

We will not discuss the Rookie Game. Scola has a gold freakin' medal. He has no use for standing around to watch former University of Texas players chuck three-pointers. Boobie shot TWENTY 3s in one game?!?!?

What about the All Star Game itself?

Hmmmm, no Kobe. No KG. And no one would pass the ball to Yao. Boring. I think I only watched about half the game. Ray Allen misses two FTs, but makes the important 3-pointers? Yeah, that makes sense.

Rockets v. Cleveland tomorrow night. Going for 9 in a row. That's what matters!