Yao > LeBron. There's your math lesson for the day.

Share All sharing options for: Yao > LeBron. There's your math lesson for the day.

Rockets v. the LeBrons tonight. Also known as "one of four nights each year when T-Mac actually tries to play defense!" T-Mac really only makes a concerted effort to play D when he's facing Kobe or LeBron. Factoring in his yearly, um, "vacations" and that's about 3-4 times each year T-Mac faces those guys. 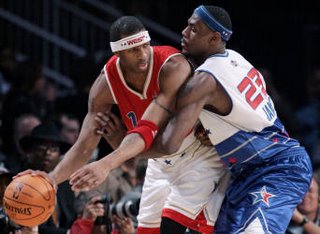 Of note: the game is on TNT - which means there should be some good halftime commentary by Charles Barkley about Yao, T-Mac and LeBron. Remember when Chuck said Yao wouldn't score 20 in one game? I love Chuck, but...... it's funny how one man (Yao) has proved us all so very, very wrong. And will continue to do so. Yao is a badass. And he's almost made me forget about that Horry/Cassell for Barkley trade. Almost. 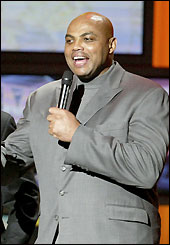 Speaking of which, after scanning last night's box scores, it looks like Mr. Horry is getting ready for his annual playoff run... that's bad news for the rest of the league. As usual.

Uhhhh, back to the Rockets. Game is in Houston, so I expect a good showing by T-Mac and Yao. LeBron is really good, but he's only one man. T-Mac can at least stay with him and negate his influence on the game. And since I do not expect Larry Hughes or Damon Jones to win a game by themselves, I say the final is Rockets 97, Cavaliers 88.

edit: For those inevitable comments about LeBron being the MVP so far (and thus somehow better than Yao), check this out: the LeBrons are 27-20. The Rockets are 28-20. Problem is, the LeBrons play in the Eastern Conference. And are somehow only 13-12 in their own weak conference. The Rockets are 16-13 in the West - a much, much stronger conference with much, much better teams. And with T-Mac out for significant time, the Rockets just kept winning. Imagine Yao and T-Mac in the East. It wouldn't even be fair.