Yes please, send him my way

Share All sharing options for: Yes please, send him my way

Let it be known that I hate Duke, I hate Duke more than I hate the Utah Jazz and the Tennessee Titans, they fit right in between there and the three things I hate more than Duke, OU, the Yankees and Notre Dame. There are exactly three players in Duke history that I have not hated or at least disliked, Shane Battier, Grant Hill and this guy: 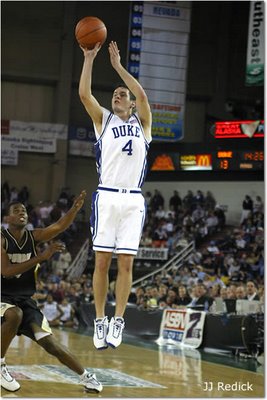 I have a special place in my heart for JJ Redick. He's the guy that everyone, even some Duke fans it seemed, hated at Duke. Since I refuse to conform, I decided to like him. He's a stone cold killer behind the arc and has amazing form. I would trade Luther Head for him in about 2 milliseconds. His defense isn't fantastic, but it's not horrible like Luther Head's or Mike James' defense is. I wonder if Orlando is that dumb? He's asked for a trade and he should get it, but only to the Rockets.

I want him on the Rockets, now Daryl Morey make that shit happen!