The Pacers review is short. The Rockets destroyed them with teamwork and offensive/defensive efficiency for 1.75 quarters. Then they let the Pacers back in for about a quarter with lazy jump shots because they got bored with a 20+ point lead. Unlike the Rockets team that would have lost this game in December, they decided to turn it back on and put the game away for good at the end of the third quarter going back up by 16. In the fourth it was more of the same. In a 4:20 span from around the 10 minutes mark to around the 5 minute mark the Rockets killed any hopes of a comeback with stifling defense not allowing a single point. From the beginning of the 4th until they built a 25 point lead with 4:54 to go the Pacers only scored 4. It was brutal defense that caused it, and when the Rockets had a lapse Indy was so scared of the defense that they shot poorly anyway. The Rockets forced allowed only two layups in that span and one was missed, the other was the last 2 points in that time frame.


Here is the shot chart, the good guys forced a ton of bad shots: 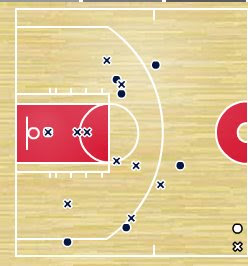 Special props go out to Shane Battier who once again shut down the opponents best player. Mike Dunleavy only scored 13 points on 9 shots, Shane tore him up. Yes he hit 3 of 4 three pointers, but 2 of them Shane wasn't on the floor for and the other 2 he made 1 and Shane was in his grill. Next up for Shane is Josh Howard.

It all adds up to a franchise record 16th win in a row, the last 7 of which have come by double digits and an average of 17+ points. And here's the crazy thing, if the Rockets can get past Dallas tonight, then they get to return home for CP3 and NO, which I like more than playing them in NO even if we split the series the wrong way so far this season, and then the schedule gets easy again. But first things first.

Last night the Rockets took the 30 minute flight up to Dallas to take on the -allas Mavericks, no Dirk no D fellas, and what's good for the Wi--rds and no Agent Zero is good for -allas. And contrary to popular belief the Mavs actually play pretty good D, so they would have had it going into the game if Dirk was around. Tonight they go head to head at 8:30PM CST in Dallas at the American Airlines center.

That brings us to why Dirk is out for the game. On Monday the Mavs took on the Utah Jazz, a team I actually hate, unlike the Mavericks. During the first quarter Dirk gently placed AK47 on the floor because the hardwood came from Russia and he thought he should be with his family. Unfortunately for Dirk the refs didn't know he was just testing AK's durability (those things are supposed to shoot in any weather and with any amount of abuse) and that he found the rumors to be untrue. Personally I think the foul should have been a flagrant 1 and not a 2, but I'm not complaining, anytime you don't have to face a superstar is a good thing, and Dirk just so happens to take pleasure in kicking the ever living turds out of the Rockets.

I keep seeing and hearing "The Rockets wanted to play the Mavericks at full strength." Here's my response: That is absolutely ridiculous. In basketball more than any sport the athletes have short term memories, they won't really care or remember that Dirk wasn't there when the playoffs come around. They are just going to remember that they have scoreboard on the Mavericks, period, end of story. Though, let's not forget, a lot of times teams come out on fire the first game of a superstar being gone, so the Rockets will need to temper that, or just play some shut down defense and eliminate the possibility. Anyway, back to my point, the Rockets just want the win, they don't want to face the Mavericks in the playoffs anyway and winning is one way to help avoid that. Winning is a contagious thing in the NBA, it just blurs together and who you played doesn't matter, you gain confidence and then you simply remember that you win, and that's how it is.

Though the Mavs have lost 2 in a row and 5 of their last 10, all of those were on the road. They have won 12 in a row at home, and their 3 losses were to Washington by 12, Denver by 13, and Cleveland by 7 all before the new year. They are 19-11 on the new year, so 7-11 on the road and 12-0 at home. I'm thinking I would have rather this game be at Toyota, but I'll take no Dirk as the equalizer. They've also won 6 straight overall against the Rockets and 5 straight at Dallas to go with 10 of 11 at Dallas. You know what I take from that? 1. The Rockets are due and 2. The Mavs lost 1, rolled off 5 in a row, lost one, rolled off 5 in a row, and now the Rockets come in to take 1 from them. I like that trend as sick as that sounds.

What's my prediction? I think you know where this is headed... 17 in a row!

Check out Mav's Moneyball and The Big and the Brown for the Dallas side.