Blackjack! (The good, the bad and the ugly)

Share All sharing options for: Blackjack! (The good, the bad and the ugly) 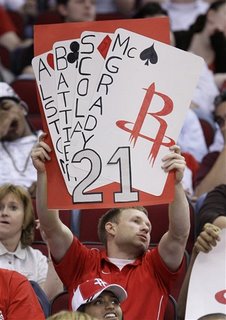 It was another trap game we survived. Barely. It was rather clear that everyone was looking ahead to Sunday. Or scoreboard watching. Or calculating "what ifs" for the standings. And that's okay - it's natural. I'm quite happy with winning 21 freakin' games in a row.

The Rockets are now in FIRST PLACE in the Western Conference. And in first place in the impossibly difficult Southwest Division (must still hold off San Antonio, New Orleans AND Dallas. Yikes.)

Also - do not attempt to dunk on Dikembe. It's a bad, bad idea. 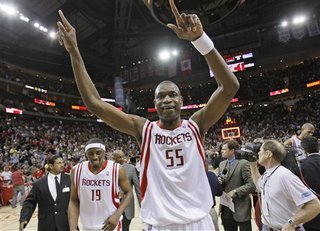 You took another 19 shots? Where at least six or seven of those were wayyyyy too early in the shot clock or purely forced. Things to remember, Rafer: (a) you have teammates. Pass them the ball; and (b) you make about 50% of your layups. T-Mac, Scola and well, most everyone else makes a higher percentage. Pass them the ball.

There is no excuse for ever going 2-10 from the three point line. Ever.

That leaves us with... the ugly. And there's no good way to say this, but, why the hell was Tracy McGrady playing all of the 48 minutes?!?!? We shouldn't need him to play the full 48 just to beat Charlotte.

We need him for the next five games. Which, oh, by the way - FU NBA schedule maker! We have to play the Lakers on Sunday and then Boston, New Orleans, Phoenix AND Golden State... all in 7 days. Now T-Mac is going to be dragging ass because of pure exhaustion. This scares me. The only consolation at the moment? Well, for one - we have a 21 game winning streak. And the Lakers, Celtics, Hornets, Suns and Warriors DO NOT. Ha ha. But also - Pau Gasol, Chris Paul AND Ray Allen all got banged up last night. I'll take that.

I just need a healthy and rested T-Mac.

Who has won NINE in a row without Yao. 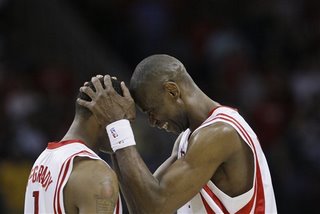