As awesome as this winning streak is (19 and counting for those still unaware)...

the hardest part has been coming to terms with the fact that Rafer Alston is - for the most part - not stinking up the joint or getting in the way of things. In fact, he's actually been a competent if not better-than-average point guard the last 6 weeks. Yes, it kills me to say it because I'd have traded his useless ass for a moldy ham sandwich back in December. And it would have made for a most excellent Christmas.

Check it out - Sports Illustrated even named Skip one of the most "overlooked" players in the NBA right now. Really. It's true. Look here. Shocking, I know. I had to read it twice just to make sure. And then I closely examined the calendar to make sure it wasn't April Fool's Day.

I'm just in stunned silence right now. Okay, maybe not silence (no one can ever truly silence me)... but I am definitely stunned by Rafer's turnaround.

This is a brave new world we enter - one where Rafer "Skip to my Lou" Alston is... good? 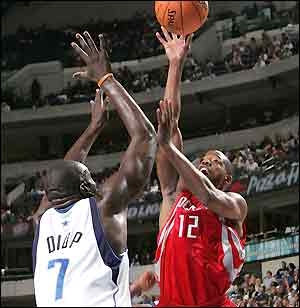 Okay, so I still hate it when he takes that "tearput" shot of his. It's such an all-or-nothing shot. And yes, I still yell "nooooo!" at the TV whenever he winds up to shoot the 3. But I'm improving. Slowly. Baby steps, my friends. Baby steps.