Getting back on topic - Go Rockets!

Share All sharing options for: Getting back on topic - Go Rockets!

I have an urgent and horrifying news story.

I need everyone to stop what they are doing... and listen.

It's a ROCKETS CANNONBALL!!!!! 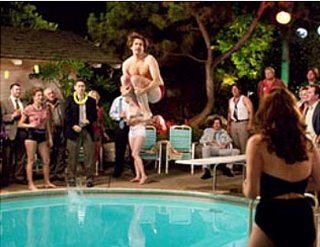 No - really, I have big news. The Rockets are going for TWENTY (20) wins in a row. Tonight. Yes, tonight. The good guys have traveled out to Atlanta to take on the Atlanta Hawks. An under .500 Eastern Conference team. Which means if we somehow were to lose, I am going to cry. All night.

Flashback: In the fall of 1993, the Houston Rockets started the season 15-0. Yes, the 1993 Houston Rockets kicked a ton of ass, but that's another story for another time. Anyway, the 16th game on the schedule saw Hakeem, Otis, Horry and Sam I Am have to travel to Atlanta to take on the Hawks. Granted, those Hawks had Dominique Wilkins, but we still should have won.

Instead, the Rockets had plane trouble and didn't get into Atlanta until late from New York (yes, they had to play a back-to-back after facing the Knicks. Such b.s.). They were so late that Veronica Corningstone almost had to play in Hakeem's place. Hakeem should have punched someone right in the ovaries for that insult, but it was too late and the damage was done.

[edit: Lee is mad and says I stole his story idea relating to the '93 Hawks game. This is semi-true.]

Let's hope the gang learns from that history lesson and takes care of business tonight. 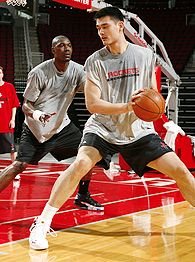 No Yao (and no Hakeem)... but there shouldn't be any problems. Unless Carl Landry can't play. We need him back!!