How is Daryl Morey not Executive of the Year?

Share All sharing options for: How is Daryl Morey not Executive of the Year?

During my normal course of interwebs browsing on Monday morning, I stumbled upon this random nugget of Laker propoganda on SI.com. Seems our esteemed writer here believes that Mitch Kupchak is or should be the Executive of the Year in the NBA. 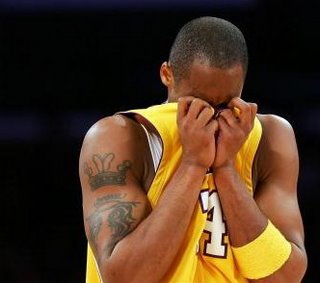 Now, granted, we did place a vote for Mitch Kupchak in a recent Blogger MVP vote. And I do not stray from this opinion. Kupchak's Gasol trade/theft caused a huge ripple effect that helped teams ahead of the Rockets sabotage themselves. It was awesome.

That does not mean that we think Kupchak is the GM of the year. Not at all.

Yes, Kup made the one huge trade. He also somehow made Kobe temporarily happy. He also did the smart thing in not trading Andrew Bynum (though my guess is that he wanted to, but he just couldn't do it). All these are valid points taken into consideration.

But where is Daryl Morey in all this talk?

The SI.com writer, Steve Aschburner, puts a side-panel list of candidates for the GM honor. You have Kupchak, Danny Ainge, Danny Ferry (what??) and a couple others... but nary a mention of Mr. Morey. Must be some bias against guys who are good at math. I'm quite familiar with such attitudes. Doesn't make it right though.

I don't know what Danny Ferry and Joe Dumars are doing on that list. Dumars is great, but has done nothing of substance this year. Ferry only added to the cap problems Cleveland had. Yeah, he got rid of Larry Hughes, but he added Ben Wallace. Not exactly an improvement on overpaid used-up players. I hate cliches, but the "re-arranging the deck chairs on the Titanic" line seems appropriate here for some reason.

All the while, what has Morey done?

1. Draft Carl Landry. Trades up with Seattle to select/steal Carl Landry as the top pick in the second round of the 2007 draft. All Landry has done since is be the most productive rookie in the entire league. Yes, even more productive than Scola, Durant or Horford. Check out the PER. It's like high and stuff.

2. Trade for Luis Scola. So, last year the Rockets had, uh, "issues" with the power forward position. Solution? Trade Juwon Howard. Draft that Landry guy. And then make sure we get it right by acquiring Scola from a division rival. In the process we only gave up a greek forward who didn't want to play for us anymore. So we took on the Butler contract... so what. It really didn't cost us anything. In exchange, we get our best power forward since Otis Thorpe (according to Morey). Scola is a badass. This trade ruled on a thousand levels. 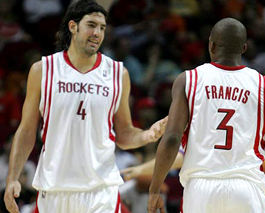 3. Dump Bonzi and Mike James! Bonzi was lazy and out of shape all year. He didn't really like playing defense much either. Nor could he make a layup. Mike James, meanwhile, sat at the end of the bench and collected huge paychecks. Solution? Trade 'em both for someone we can use who is also familiar with Rick Adelman's system. Score!! Final tally? Save money, get rid of character problems... clear up the rotation for Ricky... and acquire a sorely-needed backup PG for the playoff run.

4. Not trading T-Mac. Yeah, we discussed this theoretical trade on this blog before. We also said it was never going to happen and that most of the deals just did not make sense for us. The reward? Tracy has taken the trade talks as motivation, and we are now enjoying the fruits of his labor in the form of an 18-game winning streak (and counting). Plus, he's going to win a playoff series this year. Just watch. He will.

5. Draft Aaron Brooks. Okay, so the Aaron Brooks success story doesn't sell as many papers as the Carl Landry "coming from nowhere" story. Plus, I wasn't exactly a fan of this pick last June. I admit it. But Aaron Brooks is going to be huge for us. He's super quick in a guard-oriented league that rewards such quickness. He may be a work-in-progress, but he is practically an untouchable on our roster because he's in the mold of a Tony Parker/Devin Harris. And for a mid-20s draft pick? Pretty freakin' awesome.

6. Sign Rick Adelman as Coach. Okay, I'm an unabashed JVG fan. I still think we'd be successful if he were here. But the rumors are that he wasn't sure he wanted to come back - so quickly replacing him with Adelman was a pretty sneaky and smart move. A winner so far.

We're going to ignore the Steve Francis signing and the Mike James trade... because in the end they really didn't hurt us or the cap situation. Practically non-events.

The Rockets you see today (you know, the team that's on an 18 game winning streak...) are the byproduct of the smart and often under-the-radar moves of their talented boy-genius GM. Who for some reason is getting overlooked by the media. That just ain't right.

Go Rockets! And keep up the good work, Mr. Morey!