I did not see it, but I know it wasn't pretty

Share All sharing options for: I did not see it, but I know it wasn't pretty

Well, I didn't get to watch the game last night, so can we pretend it didn't happen? That's two losses in a row. Unfortunately some are acting like losses on a back to back means that we didn't win 22 in a row, and that we aren't still in the top 3 teams in the West record wise. We've played poorly in two straight second halves, but let me remind you that we were tied at halftime of the Celtics game and were winning by 5 at halftime of the Hornets game. All is surely not lost.

Newsflash for everyone out there: The Rockets are still good, but so are the Celtics and Hornets. Oh, and we beat this Hornets team twice during the streak. The series is tied for the season at 2-2, so it's far from a disaster that the Rockets lost. It was only a matter of time before we lost a few, in fact the Bucks lost 3 of 4 after their 20 losses and the Lakers 2 of 4 after their 33, I'm betting no one came crashing down on them after their losses.

The last two games to me have been a problem for three reasons: 1. Somehow our 28 year old superstar is tired in March 2. Rafer reverted back to being Rafer 3. We still don't have Carl Landry. Scola has been great, Shane's D has been good even if he hasn't been knocking down as many shots, and Dikembe has been pretty good as well. The shooting has to improve from the outside, but it's not always going to be great like it was during the streak.

Bottom Line for me: We need Carl Landry and his energy back and Tracy needs to suck it up and deal with being "tired" for 20 million dollars. Oh, and Rafer needs to stop talking trash while he is playing this poorly.

Here's my prediction for the rest of the season: 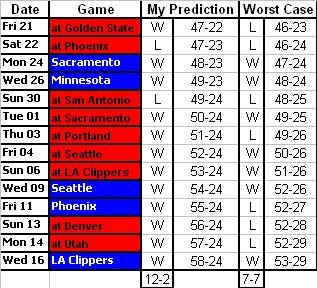