I told you Scola is a badass!

Share All sharing options for: I told you Scola is a badass!

Last night's game was tougher than it should have been. But the Rockets managed to pull away and win by double digits again. 49-23 now. 2nd in the West. T-Mac's final stat line looks good, but for the first half of the game he was playing quite miserably... only to be saved by Luis Landry. Scola, in particular. Holy crap, Luis Scola is a badass!

All of it was needed because T-Mac and Battier forgot how to shoot, and Rafer's hot start was negated by a nearly o-fer 2nd half. 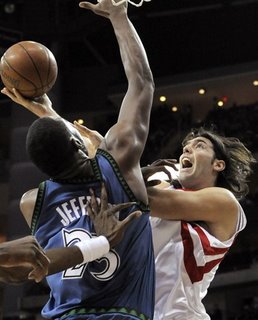 Oh, and that Al Jefferson guy might actually be good. Where was he when the Rockets won by 30 something in January? Must have been busy watching Landry's coming-out party that day (?).

Rockets move closer to the top of the West again. Now trailing the Hornets... who should have lost to the LeBrons, but LeBron shot too early and gave CP3 and David West a chance to win the game. Which they did. Damn you, LeBron! Rockets still trail New Orleans by a game. Tied with the Lakers and Spurs and practically 5 other teams in the West. Yikes.

Big game Saturday. T-Mac has 3 days to rest his shoulder and ankle. If he has to shoot 25 times versus San Antonio on Sunday... we're in trouble.