No! It's Luis Landry! Here to save the day for the Rockets -- again. 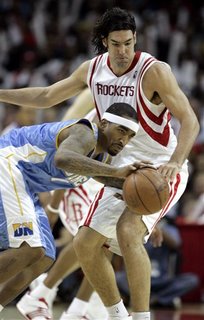 That's 15 in a row, bitches! We kinda called it. And yet no one believed us. Maybe now you will listen?? Hey - the Rockets are going to make the playoffs. We are. In fact, we'd have an awesome re-match with Utah if the playoffs started today. And we'd have home court freakin' advantage, too. Just like last year.

But unlike last year, the Utah Jazz will actually have to defend our power forwards. Who can actually catch, shoot and just enjoy being awesome. Sorry, Chuck Hayes, I like you, but awesome you are not. Okay, maybe a little awesome, but not Luis Landry awesome.

No Yao? No problem. Luis Landry only tore up the Nuggets for 30 points (on 14-26 FG) and 19 rebounds. I think they even made Iverson piss himself in fear. The Answer went an awesome 7-22 from the field, doing his best Kevin Durant impersonation. Looks like you do need practice, there, Allen.

Rockets... 39-20, 5th in West (though would have HCA against Utah, currently 4th because of the stupid rule that division winners get seeded higher).

Teams that may NOT make the playoffs:

Yes, I'm calling it now. The Shaq trade has backfired so much that the Phoenix Suns are going to be in danger of completely missing the playoffs. It's not Houston that has a playoff problem, it's the Fat Ass and his band of merry men.