It's Kobe's world - we're just living in it

Share All sharing options for: It's Kobe's world - we're just living in it

Even with the Rockets' 19 game winning streak, we still trail Kobe's Lakers in the Western Conference. Which leads me to today's thesis: Kobe Bryant is freakin' awesome. 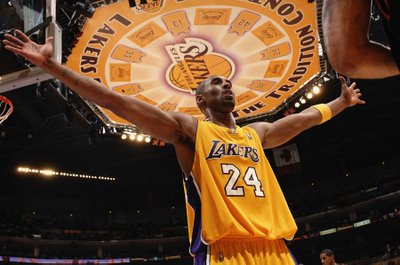 Considering I have been a die-hard Rockets fan since I can remember (the 1986 season being the first I remember with any great detail), it's weird to say that I am a fan of a player on another team who has never had any real connection to the Rockets. Robert Horry got his career started here, so I don't see the problem in cheering for Horry while simultaneously hoping the rest of the Spurs all get leprosy and die.

Kobe is an anomaly though.

I was never a huge "fan" of Michael Jordan. Or Magic Johnson. Or Larry Bird. Or Dominique. I pretty much hate Karl Malone, John Stockton and Patrick Ewing. I even hated that Ewing was a Rockets' coach for a couple seasons under JVG. This is what makes my fandom of Mr. Bryant so crazy. It's unexplainable. And yet I can't stop following everything he does on a basketball court.

Maybe it's because from 1996 to, oh, about January 22, 2006 - most NBA fans (and people in general) despised Kobe Bryant for one reason or another. As I tend to gravitate towards unpopular opinions just to mess with people, I guess I considered Kobe a kindred spirit of sorts. I mean, we're both accused of being egotistical and arrogant. We're both insanely competitive - even amongst friends, winning trumps all. His middle name is "Bean" - just like the one my favorite musical artist gave his own daughter (Ms. Frances Bean Cobain). We also both seem to have a predilection for 19 year old white girls... (Kobe was clearly innocent, so Lee, you can cut out the "Raping Garter Snake" bit for today).

Now all of a sudden people finally realize that Kobe is the best player in the NBA. Of course, they can't buy into it completely (*cough*LeBron-is-not-the-MVP*cough*). This amazes me.

Let's backtrack - for I would love to be able to pinpoint when I truly became a devoted Kobe fan.

Was it when he announced his candidacy for the NBA draft? No - the sunglasses were too much.

Was it when he took Brandy to his senior prom? No - but that was awesome.

Was it when Shaq realized Kobe was awesome and tried to keep him in his place by calling him "Showboat" all throughout Kobe's rookie year? No - but because it made the Fat Ass jealous, that was definitely a plus.

I think it was when Kobe had his first true taste of failure. His first playoff series loss - against Utah. Kobe memorably shot not one, not two, but THREE airballs in the fourth quarter of what would be the Lakers' last game of the 1997 season. While the rest of the team couldn't believe a rookie had the balls to keep shooting even after the first two airballs, it showed me that Kobe just knew he was the Man to take those shots. Even Del Harris, his coach at the time, said that Kobe was the only player on the roster who could create his own shot in those situations. Kobe had lost the big game - and yet he had arrived. 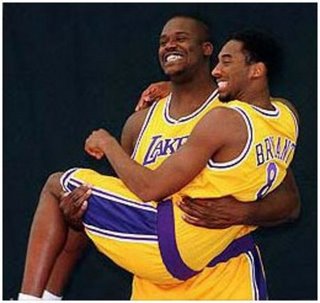 Not even the Fat Ass could slow down Kobe after that. That has to be where it all began. Even in the face of defeat, Kobe remained defiant. To this day I respect the hell out of him for that. Plus, it doesn't hurt that the team that "beat" him that day was Utah. Damn I hate the Utah Jazz. Another thing Kobe and I have in common.