What better way to explain Kobe's awesomeness than to reference a popular movie? It's kinda what we do best here. So, today - I give you Kobe in Top Gun. 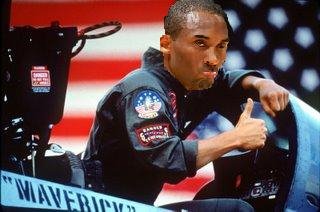 [note: I wish I had Photoshop skills. Or at the very least Napoleon Dynamite's drawing skills. Then I could do an awesome Kobe/LeBron Top Gun poster image thing. Oh, well. edit: Even better! Find a blog reader to do it for you!]

scene At the meet-and-greet prior to the 2007 NBA All-Star game.

Kobe: What's your problem, James?
LeBron: You're everyone's problem. That's because every time you go up in the air, you're unsafe. I don't like you because you're dangerous.
Kobe: That's right! Le... Bron. I am dangerous.

scene A pre-season event, with the Commish giving an orientation.

David Stern: In case some of you are wondering who the best is they are up here on this plaque. [turns to Kobe]
Stern: Do you think your name will be on that plaque?
Kobe: Yes sir.
Stern: That's pretty arrogant, considering the company you're in.
Kobe: Yes sir.
Stern: I like that in a player. 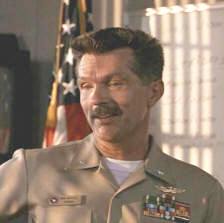 scene A timeout in early February during the 1997-98 NBA season.

Del Harris: Kobe, you just did an incredibly brave thing. What you should have done was pass the ball! you don't own that ball, the tax payers do! Son, your ego is writing checks your body can't cash. You've been busted, you lost your qualifications as team captain three times, put at the end of the bench twice by me, with a history of high speed passes over five Power Forwards, and The Admiral's daughter!

Harris: And you asshole, you're lucky to be here!

Harris: And let's not bullshit, Kobe. Your family name ain't the best in the NBA. You need to be doing it better, and cleaner than the other guy. Now what is it with you?

Kobe: Just want to serve my team, be the best player in the NBA, sir.

Harris: Don't screw around with me Kobe. You're a hell of an instinctive player. Maybe too good. I'd like to bust your butt but I can't. I got another problem here. I gotta send somebody from this team to the All Star game. I gotta do something here, I still can't believe it. I gotta give you your dream shot! I'm gonna send you up against the best. You two characters are going to New York!

Kobe: This is what I call a target rich environment.
Lamar Odom: You live your life between your legs Kobe.
Kobe: Lamar, even you could score in a game like this.
Odom: Hell, I'd be happy to just find a groupie that won't call me "Kobe". 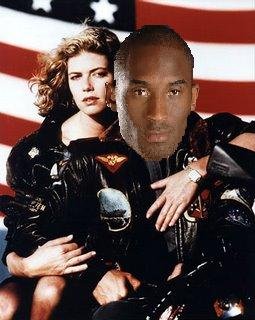 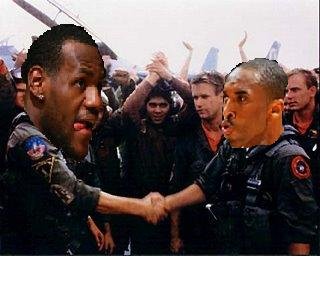 scene Any game Kobe plays in. Ever.

Again, all this is for Hardwood Paroxysm's Kobe Bryant Blog Day.