T-Mac, Luis Landry and the other Rockets host the Indiana Pacers tonight.

And I'll spare you the dramatic conclusion to any game preview - the Rockets are winning their 16th in a row tonight. Why? Because the Pacers best player has to earn his points against one Shane Battier. Oh, yeah, it turns out they already know each other. Awesome. 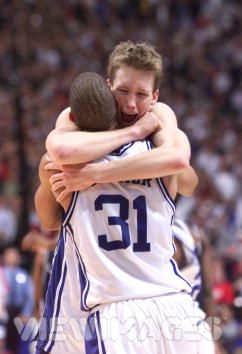 Back to the point though. Dunleavy has apparently learned how to not suck as a basketball player this year. He recently had a career high 36 points. And then matched it in the next game. But tonight he gets to try to go for 36 against Mr. Battier. Whose sole purpose in life right now is to make sure the opposing team's best player has a bad night.

Battier usually succeeds in these missions.

Dunleavy's only real chance? Distract Battier with trivia questions about popular television shows from the 1970s.

Seriously though - does anyone really think Dunleavy, Jr. is going to top 30 tonight? Battier has shut down Carmelo Anthony, Rudy Gay, Antawn Jamison and D-Wade (among others) within the last couple weeks. Dunleavy is not on their level.

Who else is going to score tonight for Indy? Jeff Foster and Troy Murphy are ecstatic that Yao Ming isn't playing, but they still gotta get their shots up against Mt. Mutombo. And then they get to battle with Luis Landry. So far, no one has really enjoyed that task.

If T-Mac plays nice, Luis Landry has the typical 20+ points, 10 rebound performance, Battier holds Dunleavy Jr. under his average and Rafer doesn't decide to shoot 20 times - the Rockets should be in really good shape to maintain the winning streak in anticipation of Thursday's HUGE game against Dallas.