So, SI.com had been writing glowing things about the Houston Rockets lately. Which, considering we had a 22-freakin'-game winning streak likely prohibited them from saying negative things about the guys. Now that we are 7 days removed from the end of the Streak - well, the claws are starting to come back out. 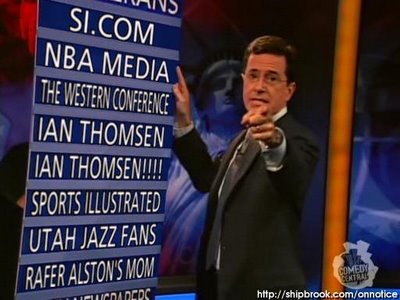 Ian Thomsen -- you are On Notice. Again.

Saw this yesterday on SI.com - a Closer Look at the Rockets. Mr. Thomsen starts out saying all the right things... we have a good system and a good coach in Adelman... Rafer is playing better... Luis Scola is having a positive impact (though Thomsen mistakenly omits referring to Scola as a "badass" - or identifying him as 1/2 of "Luis Landry")... praises the winning streak (sort of)... and acknowledges Shane Battier for being a one-man Steel Curtain on defense.

Thomsen even points out the Rockets 7-4 record sans McGrady as being a turning point (it would have been 9-2 but for the choke jobs at home against New Orleans and the Philly Debacle).

All of this sounds great, right?

Then we get to the conclusion...

After watching the Rockets play a perfect quarter of the season, it would be wrong to assume that they can't play team basketball over the month ahead. But this talk during the streak of whether they're better without Yao has been ridiculous. They're going to miss Yao badly in the postseason, and -- unless they recreate the makings of the streak, or an opponent suffers an injury of importance similar to Yao's -- they're going to struggle against all of the potential opponents in the West, each of whom should enter the playoffs with more talent.

I agree with only one statement here - that the Rockets are not better off without Yao. But most anyone who has ever watched a single basketball game could reach that conclusion. Losing a dude who is 7'5" and can actually shoot can never help a basketball team.

But the criticism of the Rockets' talent and size is wrong. Carl Landry will hopefully be healthy and 100% by May. Luis Scola is going to outwork whomever he has to play. Shane Battier has shown he can lock down Kobe Bryant, so there isn't anyone in the playoffs who will "go off" on Shane. Dikembe can still give a good 15-20 minutes. We have a very deep bench with BobbyJ, Landry, Chuck Hayes, Luther Head, Mike Harris, Steve Novak and even our favorite midget Aaron Brooks. If you haven't noticed - the Rockets tend to increase leads in the 2nd Q when both teams resort to their reserve players. It's a huge change from last year when the Rockets consistently got 0 production from the bench.

So, the "they're going to struggle against all of the potential opponents in the West" conclusion is quite harsh given that there is no statistical evidence showing the Rockets can't compete. We just beat Golden State. IN GOLDEN STATE. Also, without Yao, we've beaten Denver. We've beaten Dallas... in Dallas. We've beaten the Lakers. We've beaten New Orleans (before Rafer decided to trash talk). That's five of the 8 other teams competing for the playoffs in the West.

Sure, the Phoenix game sucked. But that was the back-end of a vicious back-to-back.

And sure, the Boston Celtics game at home was tough. But the Streak had to end sometime.

Also, yeah, I can't ignore that New Orleans took it to us in New Orleans.

But the Rockets have lost a grand total of seven (7) games in 2008. There isn't another team in the NBA that can make a stronger claim.

Is it possible that the Rockets might have another first-round flameout? Sure. Anything is possible. But it's not necessarily a "given" right now. With the possibility of homecourt, I'd feel comfortable playing Golden State, Denver, Dallas, Utah and even the Lakers in a 7 game series. A New Orleans/Houston series would be classic. San Antonio scares me of course. Phoenix also scares me only because they swing from "great" to "awful" and you never know which team you are facing on a particular night.

Either way - anyone looking to put a tombstone on the Rockets' playoff chances is hereby warned that they are subject to being put On Notice, too. We're watching. Closely.