Share All sharing options for: Once more, with gusto - FU, Richard Justice!

Hey, assclown, er, Richard Justice - could you please stop writing like a 12 year old who got a pony for Christmas???

Your Luis Scola article earlier this week practically ripped off an earlier Chron profile on Scola (that you did not write).

Your columns/blog on the Rockets streak exposes you as nothing but a bandwagon fan who is covering for the fact that you weren't around to write about victories 1-12.

It must really take some huge cojones to begin a column about McGrady and the Rockets by interjecting yourself into the very story you are reporting on.

TRACY McGrady wants to know if I'm the guy who accused him of "bailing out" last season. He knows I am, and he says it so playfully that I figure it's his way of breaking the ice and telling me it's time to let bygones be bygones.

Of course, the entire rest of your column is nothing but a re-hash of things already written about previously by your co-workers (Jerome Solomon, Jonathan Feigen, even freakin' Blinebury).

It's pretty clear that DGDB&D was right about you all along. You really are a no-talent assclown.* 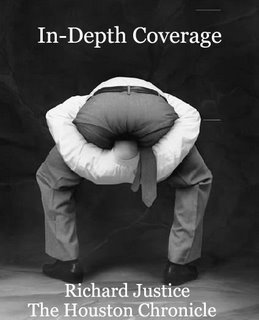 * this is not meant to be an insult to no-talent assclowns everywhere. I'm sure they do not want to be associated with Mr. Justice either.