Rockets vs. Lakers - a new kind of double/double!

Share All sharing options for: Rockets vs. Lakers - a new kind of double/double! 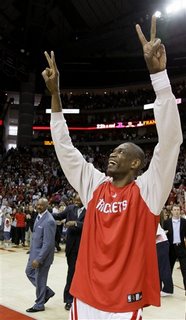 For all those who said the Rockets' Streak was just a fluke... that we didn't play any good teams... that we're really not that good of a team? Yeah, suck it - we just beat the Lakers. Who were the #1 team in the West until the Rockets decided today that it's our turn at the top.

So, yeah, that's 22 consecutive wins. The 2nd best Streak of all time.
And, in case anyone has forgotten - that is now TEN (10) consecutive wins since the Ming Dynasty abdicated his throne until next season.

Before anyone says anything about it... yes, I saw Rafer score 31 points. And make eight (8?!?!) three-pointers. I am still in shock and in total disbelief. He'd have gone for 40 if he could make a layup!! (Hey - I can't completely be nice to Rafer - even after a career day on national TV!)

Okay, okay - Rafer killed the Lakers and gave a double-middle-finger to my season-long criticism. I admit it. 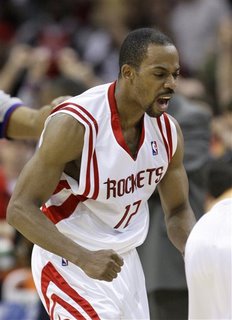 On the flip side... Rafer's career day effort was sorely needed. Tracy McGrady had a rough and I mean really rough day. Maybe not as rough as Kaz Matsui's backside... but rough nonetheless. 4-16? In a huge matchup against Kobe? 0-4 from the three-point line? 11 total points? Ouch, babe - very ouch.

Of course, the real MVP of today was one Shane Battier. Considering he's a Duke grad and all - it should not be surprising given that today was Selection Sunday for the NCAA tournament. It's kind of a big deal at Duke I hear. As an SMU alum, I would not know. But back to Shane. The MVP of the NBA this year is Kobe Bryant. It is, just trust me. What does Kobe do with Shane guarding him? 11-for-33. Yes, that's not a typo. THIRTY-THREE shots. 33%. It's like Evil Rafer played for the Lakers today and wore #24. And in those 33 shots, Kobe only scored 24. That's a phenomenal defensive effort.

Shane Battier must have earned himself a spot on the NBA All Defensive First Team with today's effort (he already belonged, but today's performance should get him all the votes).

The Houston Rockets - #1 in the Western Conference. #1 in the Southwest Division. #1 in the hearts and minds of NBA fans and all of America. 22 and counting.

Next up? Rockets host the Boston Celtics on Tuesday. We did a Q&A with the guys over at CelticsBlog. Their answers to our off-the-wall questions should be posted here sometime on Tuesday morning.

Also - for a gameday live-blog of today's Rockets/Lakers game - head on over to Hardwood Paroxysm. Matt did a bang-up job blogging Rafer's big day.