Share All sharing options for: Rockets Win! Now help out the ladies!

It wasn't a 20 point win like I thought it would be, but the T-Wolves never really threatened. They may have cut the lead to only a few points in the fourth, but the Rockets put it in cruise control late and won by double digits, increasing their lead in every quarter.


Luis Scola was fantastic last night but Carl Landry was not to be outdone. Scola had 18 point and 18 rebounds and just manhandled the young Timberwolves on the boards. He did that in 35 minutes, while poor Landry had to suffer with only 16. How did he do in those 16 minutes? 11 points and 4 boards. Together they had at least one rebound or one point in each of the minutes they were on the floor. That my friends is why Luis Landry is so important to this team. Having only one part of the monster helped us lose 3 of 4 games. Having them both back is why the Rockets will have playoff success.


Tracy McGrady, seriously man, we know it hurts, stop making such a big deal of it. I've played games with a torn rotator cuff and preened less. You are hurt, you are not injured, play through it and stop letting the other team know what ails you. On two different occasions they went after his shoulder, all because he showed them exactly what was wrong. Stop doing that! Also, if you wouldn't mind focusing in the first three quarters to go along with your great 4th quarter play of late it would be much appreciated.


Al Jefferson ended the game with the quietest 21 points in NBA history. I really like the guy, and think he has a huge future, but to those saying he's like KG statistically, that is fine and dandy, but his competitive fire doesn't seem to be stoked nearly as much. I think he'll be a good pro and in the long run the T-Wolves will have won that trade, but it's not because Jefferson is as good as KG, it's because he'll play many more years from here on out.


The good guys get a few much needed and deserved days of rest until Sunday when they take on the Spurs in San Antonio. There isn't much more to say about the game, so let's move on to more pressing matters. I ignored the first round, but the Rockets Power Dancers need your help. Voting begins today for the ladies to try and win the championship after getting stopped in the championship round last year by the Miami Heat cheerleaders. So go to NBA.com and vote! 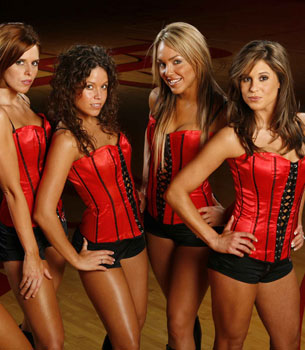