Rockets/Hawks - the Best of Both Worlds!

Share All sharing options for: Rockets/Hawks - the Best of Both Worlds!

Last night's game was not only our 20th (!?!?!!) win in a row... it was also the best of both worlds for me as I write today's recap. And no, I am not referring to Randal Graves' movie selections when I say "Best of Both Worlds." I promise.

No - it's a twin killing, because not only did we win - and win ugly - in a very classic "trap game", but now I also get to insult, cajole and ridicule Rafer Alston mercilessly after actually saying something nice about him yesterday afternoon. I think a chick-with-a-dick could have outplayed Rafer last night.

Seriously, 3-18? What convinced you that taking eighteen-freakin'-shots was actually a good idea, Rafer? Was it when you finally managed to hit the rim on shot #7? I mean, usually an 0-8 first half shooting display would encourage me to tone it down in the second half. But no, you chucked up ANOTHER ten shots! An impressive display of hubris!

Hey, Rafer - you suck! Ya jackass! 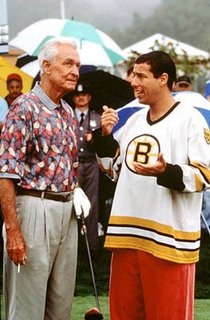 I can't believe you are a professional basketball player, Rafer. You should have been working in the snack bar during the 2nd half! What the hell was that shooting display last night?!?!?

Okay, okay - enough about Rafer. It's pretty clear he sucks again and the "old" Rafer re-emerged after two months in hiding. I sorta liked the new Rafer, but last night reminded me why I still hate the mere concept of "Rafer Alston, starting point guard."

As for the game itself - the win was absolutely freakin' necessary. And thank God we have T-Mac, Luis Scola and Chuck Hayes. Carl Landry would have been MVP of this game, but unfortunately he and Yao were back in Houston playing cards. For the first time in the streak I actually thought the outcome might be in doubt.

Let me put this in a different perspective. Richard Justice will probably rip this off later today, but whatever. Let's look at the standings. Right now the Rockets are 44-20 and on a 20-game winning streak. We are still one game behind the Los Angeles Lakers for #1 in the Western Conference. Everyone knows this.

BUT - what if, for some crazy reason, we "only" went 15-5 over the last 20 games? I mean, it wouldn't have been all that surprising to lose to Cleveland once, the Hornets once or twice, the Mavericks or even the Atlanta team we saw last night. Not to forget about Denver. If we somehow dropped five of those games, we'd be 39-25. Still respectable, right? And yet, we'd be in 8th or 9th place in the West and still scrambling just to make the playoffs. Especially if one of the hypothetical losses was to Denver.

Think about this: We needed every single one of the games we won during the streak. How ridiculous is that?

Last night's game is why we love the Rockets though. To explain it using a poker metaphor - it was a classic night of being card dead and yet grinding out a profitable evening anyway. We couldn't shoot. We had trouble rebounding. We couldn't pass the ball either (thanks, Rafer). And yet we just found a way to stay in the game and somehow steal a victory. The NBA equivalent of a successful bluff.

Of course, it helps when the Hawks decide to try to guard Tracy McGrady with Marvin Williams. Yeah, that makes no sense. Thanks for the gift, uhhh, who is the Hawks coach again? I forgot his name. Do they even have a coach right now? 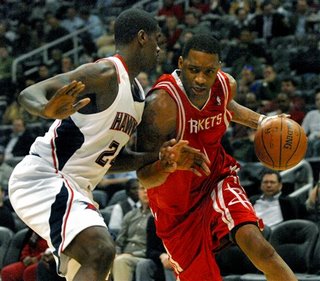 Well, a win is a win. And I'll definitely take it!

Friday night - the Charlotte Bobcats. Another young, athletic team.
Win #21 in a row!