Rockets/Kings - where I say nice things about Rafer

Share All sharing options for: Rockets/Kings - where I say nice things about Rafer

As of 7:29 pm last night, I was formulating a rant where the singular purpose was to tell Rafer Alston to simply shut the F up.

In the last two weeks, Rafer decided for some reason trash talk Chris Paul... got into semi-fisticuffs with Sasha Vujacic... been mind-f--ked by Rajon Rondo... and then torn up by CP3 in the revenge game in New Orleans. The lesson? Do not mess with CP3. Oh, and actually not be a mediocre player in the NBA when you decide to do your best Gary Payton impersonation. 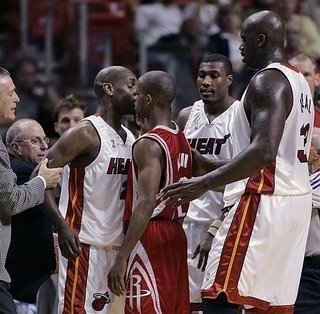 Then the Rockets/Kings game started last night. And my whole world seemed to change. The Rockets did everything they could to lose the game. (1) They gave the Kings a standing invitation to form a layup line; (2) T-Mac's body language was begging the Kings to bully him with his bum ankle; and (3) no one could make a jumpshot. Not T-Mac... or Battier... or Head... or Scola...

In the end, the Rockets won 108-100 and won game 1 of what is hopefully a 8+ game winning streak. Yet I was convinced they were trying to lose. Rafer wouldn't let them.

I can't believe I just typed that. Skip led the way with 28 points, 5 assists, 3 rebounds and 2 steals. He even made 7-8 of his free throws. Now that is how you endear yourself to me! Make your free throws! Rafer even made a consistent amount of those "tearput" shots of his. And not one time did I say "oh, no!" when he released it. I'm not even kidding. 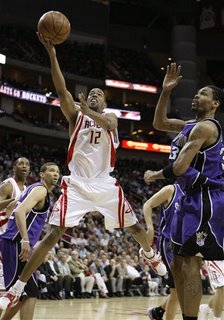 I may have to re-evaluate things. Two weeks ago - during the Streak - I still considered "point guard" to be our potential weak spot in the playoffs. The way Rafer is playing in March is changing all of that. He's actually looking like a legitimate NBA point guard these days.

I'm about 80% sure now that someone slipped me some long-lasting opium while I was in Vegas. Rafer Alston = good? Well, at least I can avoid the wrath of his mom today.

Oh, and Ricky got his 800th career victory. Congrats, Mr. Adelman. Next up? Minnesota on Wednesday. No way we can lose that game, right???