Share All sharing options for: Rockets/Mavs - "17" is legal in Texas!

To get the proper perspective on what is now a SEVENTEEN game winning streak - we go straight to the voice of authority. Chef. 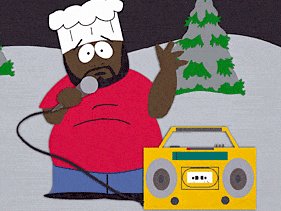 Hey, Chef, what's the right size for a winning streak?

But what if our best player gets injured and is out for the season after only the 12th win?

But what if everyone says that we can't win without Yao and we're only winning because our schedule is soft?

The Rockets absolutely destroyed the supposed streak-breaking Dallas Mavericks last night. No, they didn't have Dirk, but we'd have won even if he played. We didn't have Yao - and you don't hear us bitching about it. We've won five straight after having our season declared dead by such NBA luminaries as Stephen A. Smith, Charles Barkley, Jalen Rose and most of the blogosphere.

Our daily Luis Landry update? 29 points, 11 rebounds, 3 assists, 2 steals, 2 blocks and a handful of soul-crushing dunks by that Landry guy.

And holy hell - the Mavericks made Rafer look like CP3. Shooting, passing, dancing around... Dallas could not stop Rafer Alston. Rafer had a SEASON-HIGH 24 points to go with his 4 assists, 5 rebounds and 2 steals. The best part? During the game Marv Albert was openly fellating Rafer. 2 seconds after tip-off, Marv said that Rafer was having an "excellent season" (Marv must have been busy doing something else in November/December). Then, after halftime, Marv said Rafer is "having a career year" (no, he's not, but he was an absolute badass last night). 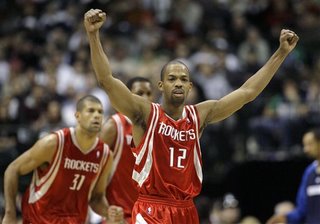 Then again, Reggie Miller said that Carl Landry's "weakness" is rebounding. Yeah, apparently Landry is a poor rebounder. Do the TNT guys watch any game film at all? Landry's weaknesses are free throw shooting and an inability to hide his God-like tendencies among normal human folk. That's it. The dude rebounds. He just doesn't have to when we shoot 54% and the other half of Luis Landry gets the available rebounds. Teamwork rules.

Speaking of ruling... I rule!! 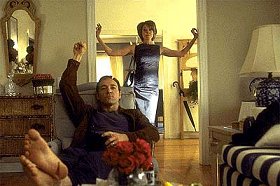 I predicted a win against Dallas. I backed it up by taking a bet. And now that bet is paying off. Sometime later today, the unfortunate victims at The Big and The Brown will be posting my recap of last night's game. And, oh yes, I went back to the Toni Braxton story. Picking on Jason Kidd is fun and necessary all at the same time.

Don't mess with the Rockets, Texas (or me). Just stay out of my way. Or you'll pay. Listen to what I say.