The streak is maturing before our eyes!

Share All sharing options for: The streak is maturing before our eyes!

The streak is now of voting age! 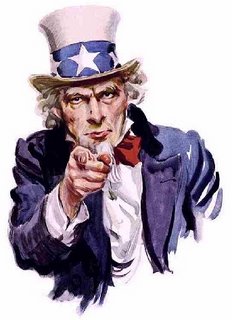 (Uncle Sam wants you... to get on the bandwagon)

CP3 tried everything he could do. And I mean the 37 points and 11 assists kind of everything, but the Rockets continue to win. And win by double-figures. Again.

T-Mac had 41. First player to score 40+ in the Toyota Center since Carlos Boozer in the playoffs last year. I guess T-Mac doesn't hate the home rims so much anymore.

Rafer continues to figuratively give me the middle finger every time he takes the court now. A very, very impressive 20 points, just enough to cancel out the only All Star on the court last night. Rafer was apparently trash talking Chris Paul the whole game, too. Ballsy. For example:

"I don't like them. They don't like me," Alston said. "They keep telling me to stop talking. I'm great at talking trash."

Paul, considered an MVP candidate, was pretty good at it, too. "I wish I could be half as good as him one of these days in the NBA," Paul said, "since he thinks he's so great."

For a while I thought it was the Duke/Carolina game I was watching - with all the long-distance shooting and complete lack of free throws. Rafer, Novak, T-Mac, Battier, Luther Head... everyone was making threes. It was crazy. And I loved every minute of it.

Bring on New Jersey... as the streak marches onward to 21 (and it better hit 21 - our next three games are against sub-.500 Eastern teams).