To hell with it - everyone is On Notice!

Share All sharing options for: To hell with it - everyone is On Notice!

It wasn't enough that Ian Thomsen and SI.com started bashing the Rockets.

No, the Sports Guy had to pile on, too (though, with flawed analysis).

Even ESPN has their backhanded compliment of the week for the Rockets. Almost expecting T-Mac and Adelman to fail in the playoffs.

And, insult of all insults, even our buddies over at Hardwood Paroxysm are now suggesting that other teams in the Western Conference might resort to tanking just to position themselves to play the Houston Rockets in Round 1 of the playoffs. 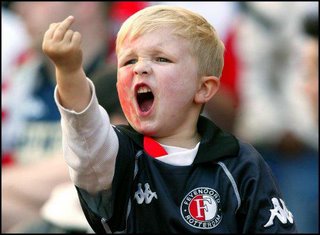 Yes, I know yesterday's game against the Spurs gives a LOT of fuel to the fire of any critic of the Houston Rockets. I'm quite sure that sometime yesterday afternoon, Stephen A. Smith was dancing around frenetically all giddy that one of his random statements might possibly, possibly be accurate. (It was not, but that's a discussion for another day.)

Let's backtrack for a second.

mid-January... Rockets languishing in 10th place. No hope of playoffs or anything. I say not to worry, we're making the playoffs. We'll be fine.

early-February... Rockets begin the Streak. Everyone dismisses it as an easy schedule. But I don't recall anyone else in the NBA winning 22 in a row.

mid-February... Yao is hurt. Out for Season. Every single NBA analyst that I can recall declared the Rockets' playoff chances dead. T-Mac and the gang ignored them and won another ten in a row.

March 30th... Rockets lose to Spurs. Badly. Rockets now "frauds"... even though we've beaten New Orleans, Los Angeles (Lakers), Golden State, Dallas AND Denver -- all without the services of Yao. And in some instances without Carl Landry, too.

San Antonio scares me in the playoffs. But they scare everyone.
Phoenix scares me because Rafer can't stay in front of Nash. And Shaq might confuse Landry and Scola with a hamburger and fries. Dangerous.

Beyond those two teams, I truly believe the Rockets have a good chance of seeing some playoff success. Bonus points if we get to beat up on Utah at home. Really.