Where we welcome back a familiar friend

Share All sharing options for: Where we welcome back a familiar friend

Lost in all the hulabaloo about Yao, Yao's season-ending injury, "Luis Landry," the 15 game winning streak (soon to be 16), the Bobby Jackson trade, and T-Mac actually trying to defend his performance in Game 7 last year (yes, this will be a post of its own... the audacity of T-Mac!) -- I realized I had forgotten about someone!! 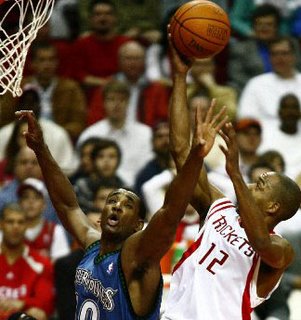 To be fair, lots of things get overlooked when your team wins 15 freakin' games. IN A ROW! But, just to be clear... we maintain the following stance:

I realize I had not used that tag in any recent posts, but certain moments in the last few games reminded me of this eternal truth. I was a the Memphis game. Rafer played great for 2 minutes... making three 3s and a layup almost immediately. Then he never scored again. Or played defense. Or did much of anything. Fortunately, the opponent was Memphis, so it did not matter.

Then last night I'm watching the Rockets/Nuggets game - and right from the tip, Rafer is chucking shots like there is no tomorrow. And, naturally, missing badly. He even took a 3 from somewhere around 28 feet. With plenty of time still on the clock. Made no sense to me. He did finish with a respectable stat line, but his tendency to get shot-happy scares me.

Think I'm over-reacting? Check this out:

Rafer's stats for the past five games.

If the playoffs started today, Houston would host Utah. Which means Rafer would be matching up with Deron Williams. Oh... shit.

In the last five games, Rafer is averaging six (6!!) three-point attempts per. While making about 1/3 of them. Which is okay, I guess. But that's a lot of unnecessary chucking. He's also averaging over 12 shots a game. When Yao went down, I did NOT expect Rafer to be the one to take the extra shots. The offensive pecking order should be T-Mac, Scola, Battier... and then somewhere after that guys named "Rafer."

Amazingly, Rafer is up to over 40% shooting on the season, and 34% from the 3 point line. A major improvement over November/December, but he's starting to regress back into the unconscious shooter he should never be. He still can't shoot free throws though. And he and Luther Head combined to make the Lowry/Crittenton guard combination look like All Stars. It is not a comforting thought.

While I really like the chemistry and ball movement we've shown with Yao out, and the Rockets' team D has been undoubtedly fantastic... Rafer's potential to undermine all of this forward progress scares me to death. Then again, if you told me we'd get 12.4 points and over 7 assists per game from our starting point guard - I'd guess I'd be happy with that.

Just know that you're not off the hook, Rafer... we're watching. Closely.