The excuses are starting already

Share All sharing options for: The excuses are starting already

It's not a good sign when you lose the first game in a 7 game series and the local columnists are already writing obituaries for the Rockets AND some of the players. Seriously, guys, it's all of one game. There are 6 more to go!

Today's headline? "Playoff flop? Alexander has McGrady's back" (yes, I know Richard Justice forgot the apostrophe and the 's', but he's already got enough issues being a no-talent ass clown... no need to pile on further.)

What kills me about Richard Justice is his tendency jump to conclusions. It's like he bought Smykowski's prototype and uses it as a security blanket for his column ideas. 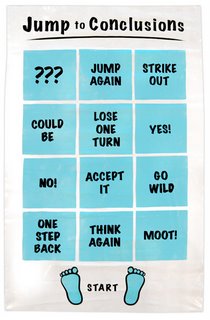 For example, if Justice isn't complaining about the Texans screwing up because we didn't draft Vince Young (since proven wrong), it's the 2005 Astros' season being over in May (see the article next to the infamous tombstone graphic that year). Now Justice is already making excuses and trying to explain some supposedly inevitable Rockets' playoff loss.

Today it's about the Rockets and T-Mac. And while Justice doesn't come out and write a pure gloom and doom storyline... he's setting the stage for hedging his own bet.

[Now, let me be clear - Justice is dead on correct when he says Les Alexander is a great owner of a sports franchise. He is. The decision to hire Daryl Morey was genius. It does help that Daryl Morey actually is a genius, but that's another point for another day...]

But today's column leads off with the typical McGrady is a playoff choker hook. Justice segues into the opinion on Les Alexander, but he relies on the McGrady-as-not-clutch cliche to get there. Which is sad. Yet true.

Just look at li'l Dickie's last line in the column:
"Things are against the Rockets again after Game 1."

I am Jack's complete lack of surprise. I guess I shouldn't expect much from him. Of course, if McGrady goes for 40/15/8 tonight, you know Richard Justice will be the first in line to fellate him after the game.