Share All sharing options for: From the "that's obvious" department: Hakeem Olajuwon elected to Basketball HOF

Hakeem is a Hall-of-Famer. Officially.

This is not exactly "news" or "surprising" or even the slightest bit informative. We've known Hakeem was a Hall of Fame basketball player since 1994. (Okay, *I* knew before that, but the world couldn't debate me after 1994.)

Why 1994? Because Olajuwon destroyed some chump named Patrick Ewing. While Ewing's coach sat idly by and did next to nothing except try to ugly up the game and foul everyone. 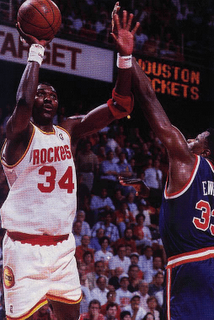 What's that? Ewing got elected to the HOF, too? And Riley? Bullshit!

The namesake for the Theory that a team gets better when he leaves is a hall of famer?

Riley tried to ugly up the game for nearly a decade (New York, Miami) - to the extent the audience had enough and forced significant rule changes by the league to increase scoring. But he gets rewarded, too? Weak. So very, very weak.

Now Hakeem has to share the stage with these two lesser individuals? Shenanigans!!

Congrats on making the Hall of Fame, Dream! We'll be sure to edit out these other guys from the induction ceremony as best we can...