Game 5: Where Utah takes the night off

Share All sharing options for: Game 5: Where Utah takes the night off 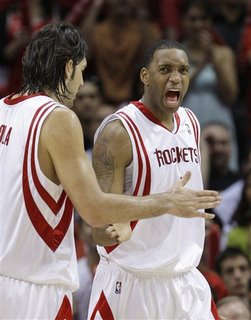 If you had told me a team would win by 26 points last night... I'm not going to lie, I would have suspected the winner would have been Utah. The Rockets are not exactly built to win playoff games by 26 points. We grind it out, wear you out - and then win by 5.

Utah disappeared last night. There is no other explanation. 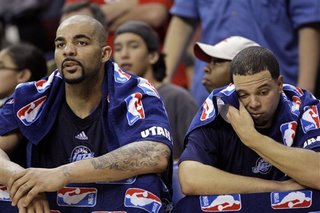 Not that I am complaining - watching the Rockets kick ass and take names brought back fond memories of February and March. Good times. It also reminded me of 1994 and 1995. Even better times.

And, yes, the Rockets' defense is that good. Now you have more evidence.

Additionally, McGrady showed up for the fourth quarter, finished with 29 points, 5 rebounds and 5 assists (and one gorgeous Kobe-esque fake-out of Andrei in the fourth quarter). Of course, McGrady did get a little jump shot happy and took about 4 more three-pointers than he should have (1-4 on the night). Nevertheless, he somehow finished with a 50% shooting night! A friend reminded me this morning that this is the first time in 23 games or so that McGrady shot 50% or better. Is T-Mac back???

The Rockets won when Shane Battier couldn't do anything on offense. The Rockets won even though we let Luther Head sneak into the game for 14 minutes. Luther did absolutely nothing in those 14 minutes, but hopefully Ricky saw that and duct-tapes Luther to his locker before Game 6.

Of course, the most impressive thing about the whole night?

It's not record-breaking or anything, but I'll take 78% shooting from this gang any night.

The second most impressive thing about last night?

The Rockets won even though Steve Javie was the referee. Trust me, that scared the s--t out of me when Lee sent me a text message pointing out that Javie was in the building. Javie scares me and he is notorious for being unfriendly to the Rockets. 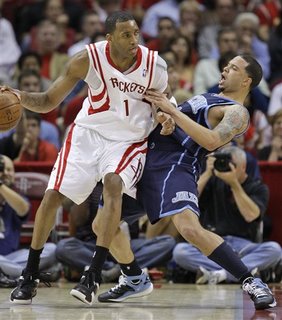