It's time to start a 17 game winning streak!

Share All sharing options for: It's time to start a 17 game winning streak!

Lee will probably have tonight's game preview up this afternoon. Prediction? Rockets win in last game of the year and T-Mac and Scola get lots of time to share jokes with Cookie Monster on the bench in the 4th Quarter. It's the last regular season game of the year. 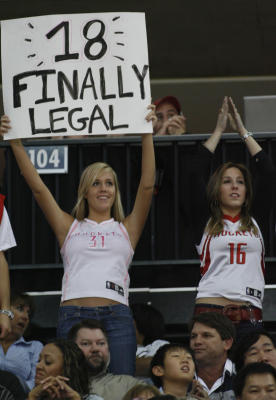 I bring this back up not only because it's a picture of two barely-legal Rockets fans (we don't need to resort to such things for attention, do we?), but instead - because the Rockets need to use tonight as the launching pad for ... wait for it ...

Yes, yes, I know... "you are delusional, dude!" "That's not going to happen!" "You looked like shit against Utah and San Antonio!"

I'm just sayin'... there's a chance. Maybe the last few weeks of uninspiring basketball has just been the prelude to a re-charged Rockets team (and fan support). Maybe they have just been playing possum with the rest of the NBA... i.e., no need to let Utah know how we intend to play them when it really matters. Damn I hate the Jazz.

All I know is the playoffs tend to bring out the best in everyone. T-Mac needs a playoff series victory. Battier apparently needs more games to prove he truly is DPOY. Scola needs a championship ring to put next to his Olympic Gold Medal. Rafer needs to keep playing so he doesn't go and assault anyone. 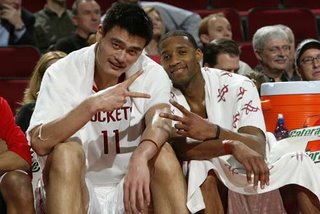 Tonight's opponent may only be the lowly Clippers. But the playoff run begins at 7:30pm tonight! Be ready!

note: Around 4:00pm CST today, I will be on the Steve Mason Show on ESPN radio (station 710 Los Angeles) to chat about the Rockets and the playoffs.