Share All sharing options for: The NBA Playoffs: Where Luis Landry Happens

Kiss My Ass, Carlos Boozer - there will be no sweep!!!!

Rockets try their best to blow a 7 point lead, but Luis Landry was having none of it. 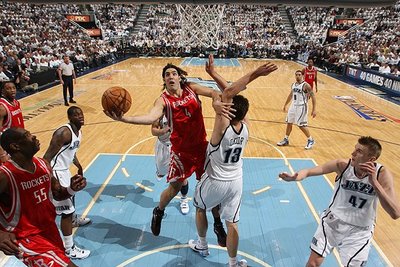 Defense, defense, defense. The Rockets finally boxed out and stopped going underneath the picks... and all of a sudden, they started winning. Amazing how that works!


Stat of the Day

The obligatory Tracy McGrady commentary: see what happens when you stop taking outside shots and drive the ball to the basket?!?!? Good things happen! All good things. Of course, T-Mac forgot this rule with 1:40 left to go and stopped driving the ball and started taking those off-balance 18 footers again (missing badly, I might add), but he made up for it with a big block and a big defensive rebound.

Hey, guys, in Game 4 - could you do me a favor? Stop leaving Ashton and Memo open for clean looks at 3-point shots. When a 7 point lead turns into a 1 point lead in less than a minute, that's hard to sit through. Let's not do that again. Next time, push the lead into double digits. Step on their necks. Crush their spirit. Deal?

(Meanwhile, I'm going to ignore the fact that McGrady was nearly scoreless again in the 4th Q... waiting until 4 minutes left to go. And he still has only 2 FG over 3 4th Qs so far. It remains a concern going into Game 4.)

*note: For Utah Jazz fans, "Luis Landry" is the combination of Carl Landry and Luis Scola. I figured you might need the explanation. Our rookies are better than your roookies.