Share All sharing options for: Ode to the Tall Token White Guy Shooter

I want to take a walk down memory lane. For it seems the Rockets have had quite the history in employing tall, lanky white dudes who do next to nothing but stand outside the 3 point line and make open jump shots. It seems every year the Rockets have at least one guy who is 6'9" or 6'10" that has no use for defense but a fond affection for the three-point line. Novak is just the most recent version to come off the Rocket assembly line. And we love Novak.

I therefore present... an Ode to the Tall Token White Guy Shooter! 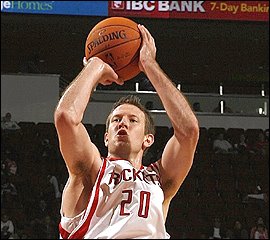 Novak is the prototype tall, white guy NBA player. If you leave him open, he is going to make the shot. Bill and Clyde considered it a "layup" for him last night. I'd much rather have Novak shooting open 3s than Rafer or Luther trying those corkscrew layups, that is for sure!

Novak's weakness? Well, he's not exactly fast on his feet. Which makes the whole "defense" thing rather difficult. Yet he played rather solid defense on Durant last night. Color me impressed, Mr. Novak!

Season/career highlight? Novak did rescue us in the Sacramento game during the Streak. Remember, he was the Man in Black!!

[2005-06 Rockets... no token white guy shooters. No wonder I never really took a liking to this team. They missed the playoffs. Badly.] 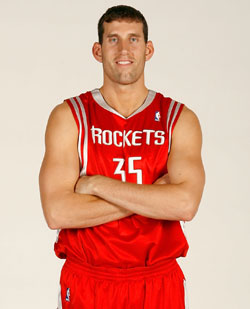 Padgett was a good fill-in player for two years for the Rockets. He was part of that group that did the weird "3" sign with their hands every time they made a big shot (thanks for that Jon Barry, much appreciated!). Of course, Padgett was a white dude from Kentucky - of course you'd expect him to be a good shooter. He did not disappoint.

Padgett also played a little defense. Not much, but enough to keep him on the court for 10 minutes a game nearly every game. Of course, Padgett asked for too much money and we didn't re-sign him. Whoops.

Season/career highlight? In January 2005, Padgett had a career-high 22 points (6-7 on 3s!) against the Sacramento Kings. But the Rockets lost. Kinda bittersweet, but still a career day. 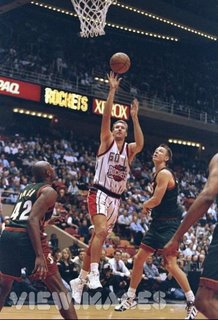 Matt played with Hakeem... and he is still working for the Rockets. He gets two photos. 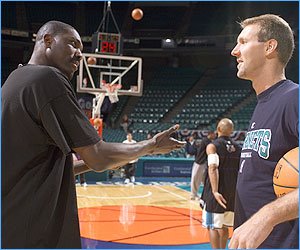 Bullard is our favorite token white guy shooter. Ever.

Bullard has a ring. The first one. Which by necessity elevates him above all the other token white guys we are paying tribute to here today. Bullard was part of the glorious 1993-1994 Houston Rockets team that started off 15-0, finished with a team record 58 wins, and won Game 7 of the NBA Finals at home. Oh, man, I loved that team. Bullard was a key component of everything we did that year, too.

Bullard missed the 1994-95 season, then left to go to Atlanta, quickly realized his mistake and returned to the Rockets in the 1996 season. Then he had the misfortune of losing to Dee Brown on that stupid ESPN "Dream Job" show. Matt is now back with the Rockets organization and broadcasts all the road games with Bill and does analysis on the side for the home games. 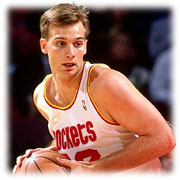 Yeah, you forgot about Chilly Pete, didn't ya!

Pete has him a ring, too. He played with Hakeem and Clyde and Horry on the 1995 team that is the only 6 seed to ever win the NBA Championship. For that, I have very fond memories of Pete. Though I almost forgot that he actually was a significant player in our rotation - he played 20 minutes a game that year, averaging 5.3ppg on 44.5% shooting. Gotta love Chilcutt.

As you can see, the Rockets have relied heavily on the tall token white guy shooter. Every season we have failed to employ one has been a season filled with disappointment, and usually a trip to the lottery.

What's that? I forgot about Scotty Brooks? 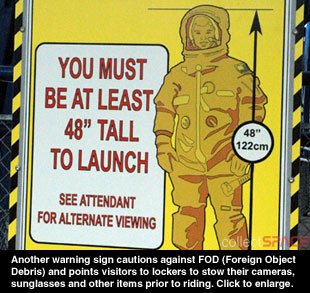 Ha, ha - just messin' with ya, Scotty! We still love ya in Houston. Even if you are working for Seattle/Oklahoma City now!