Share All sharing options for: Shane Battier is the DPOY - here's proof!

Shane Battier is the Defensive Player of the Year for 2008.

There are no other legitimate candidates.

Oh, sure, someone will name drop Marcus Camby, or Ron Artest, or maybe even Kevin Garnett. And I'd give someone the time of day if they made a case for Garnett, but not for anyone else. And I mean anyone.

See, Shane's statistics are not going to blow you away. He averages only 5.1 rebounds a game (3.4 defensive). He only gets 1 steal a game on average. And while he's #2 on the Rockets in blocked shots, he only blocks 1.2 per game. Translation? You aren't going to see Shane doing any finger wags to the crowd anytime soon.

My point, however, is this -- since when have individual statistics ever defined good defense? 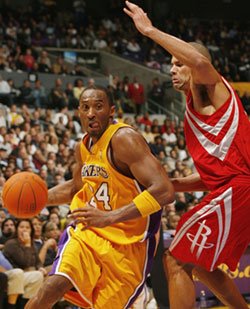 I've taken the time to put together a chart of the NBA's leading scorers and compared how they did against the Rockets (and by extension, Shane). I've also included their FG% against the Rockets, because the Rockets let you get your points, but you gotta take a lot of shots to get there.

The results... well, see for yourself:

(... sorry about the bad graphic, it was the best I could do to get all those names and numbers in one place. But anyway, back to the point.)

All stats pulled from http://www.basketball-reference.com/.

We all know that Shane's job is "guard the other team's best player" so long as it's not a center (Dwight Howard) or super-quick point guard (CP3). The * next to the player's name indicates that this is a player Battier is likely to match up with defensively. On the chart there are 21 players on this list that qualify as such: LeBron, Kobe, Carmelo, Kevin Martin, Michael Redd, Richard Jefferson, Maggette, Joe Johnson, Antawn Jamison (when Tuff Juice is hurt), Jason Richardson, Jamal Crawford, Stephen Jackson, Josh Howard, Rudy Gay, Manu Ginobili, Durant, Pierce, Iguodala, Turkoglu, Brandon Roy and Ben Gordon.

(1) Only two players of the 21 shot better than 50% from the field against Shane - Corey Maggette and Paul Pierce. Maggette did not take very many shots though in that one game (13) and still was more than a point below his season average. Pierce is pretty good, so I am not surprised he shot over 50%, but he never "went off" in either of the two games.

(2) The highest average against Shane was Kobe, with 33.0 ppg. Of course, that is heavily tilted by the 45 point game to open the season. But we can't ignore that game. On the flip side was the nationally televised game where Shane held Kobe to 24 points on 11 for 33 shooting. I would think it's safe to say Shane got even. Oh, yeah, the Rockets won both games, too.

(4) Shane really really makes an effort to stop Rudy Gay. Then again, they were traded for each other, so that should be expected.

(5) Think about that again, the HIGHEST average was 33.0... and that was by the same guy who was the only person to go for 40 against Shane. Kobe. That Kobe guy is kinda good. And even he shot below 40% against Shane this year.

Not only does Shane routinely hold you below your season average, but your shooting percentage is likely to take a hit in the process. You would think that a random fluke player might drop 35 a couple times on Shane and also shoot over 50% in the process. But it just does not happen. With anyone. At least not in 2007/2008.

Big or small, quick or strong... Shane keeps you in check. And with a hand in your face. 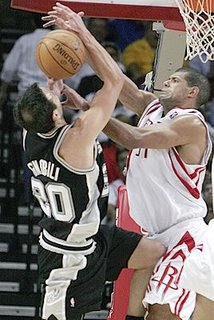 Battier's defense is so good that defense he played a year ago is still having an effect on individual players this year! (Dwyane Wade and his bum shoulder agree - do not try to score on Shane. You will pay! Bitch about calls? Shane will send you off the court crying for a wheelchair. Wade has never been the same since.)

Ladies and gentlemen, I present you with your 2008 Defensive Player of the Year:
Shane Battier