Share All sharing options for: State of the Union Address: Houston Rockets

We are officially in Playoff Mode. And the Houston Rockets are prime participants in this glorious adventure of basketball played at its highest level over the next 2 months. And Lee and I got everything we asked for when it comes to the playoffs. Bring on the Utah Jazz. Who I hate. So very, very much. 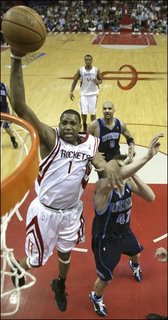 I therefore present the 2008 State of the Union Address for your Houston Rockets.

The Houston Rockets are a Team. With a capital "T." Yes, we have a future Hall of Fame elite-level superstar in one Mr. Tracy McGrady. Yes, we also had another future Hall of Fame center in Yao Ming (until Tuesday, February 26th). But there is no ego among this group. There is no "I" in this "team"... and if necessary, they would even mis-spell "team" to leave out the "me" just to prove the point.

Need a defensive stop? Battier, Mutombo and Chuck Hayes are on it.

Need an offensive rebound in traffic? Enter Luis Landry (hey! I haven't been able to use "Luis Landry" in a while! It's good to have it back in the vocabulary!) 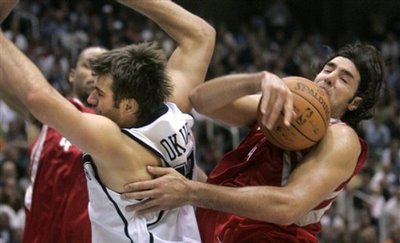 Need a laugh? The Cookie Monster has that covered. And if you don't laugh, he's going to wag his finger at you.

That said... let's take a look at the pieces that have contributed to the Playoff-Bound-Houston-Rockets. Oh, and we have homecourt advantage again. Suck it, Utah!

It begins and ends with T-Mac. Last year, McGrady said it was "on him" - probably to relieve the pressure that may have been on Rafer and Chuck and Shane and, well, pretty much the whole team. This year? See above about that whole "team" thing. T-Mac needs to facilitate the offense and NOT shoot those transition threes. In fact, no jump shots, Tracy. No. I want to hear nothing but this for the next 4-7 games:

My new favorite Rocket. Well, other than Yao. Yao is a badass, but he is not walking through that door right now. As I told ESPN yesterday, Luis Scola is the x-factor of this entire series. What we were missing against Utah last year was someone willing to mix it up and not back down to the dirty, dirty Jerry Sloan tactics. Prepare to be undercut, back-picked and flopped to death Houston fans. Luis Scola can fortunately give as well as receive.

He's hurt? Good. I didn't want to have to say nice things about him and then jinx the rest of the team because of it.

The Defensive Player of the Year. And I don't care what anyone says about KG. Shane is DPOY. This series, Shane is going to probably match up with Andrei... who isn't exactly Kobe, LeBron or Carmelo. It's okay though, Shane - you'll get to stop Kobe in two weeks' time. Just be patient!

The living, breathing, perfect example of why you ALWAYS have a competent backup center on your roster. Always. Imagine the Rockets with no Yao and no Deke, either!?!? Scary.

He who shall replace Rafer for the next 2-3 games. I was happy when we traded for Bobby J. And I have every bit of faith in him. right now. Daryl Morey is a genius you know - he picks up a vital contributor AND dumps a locker room cancer in Bonzi all at the same time. Brilliant! 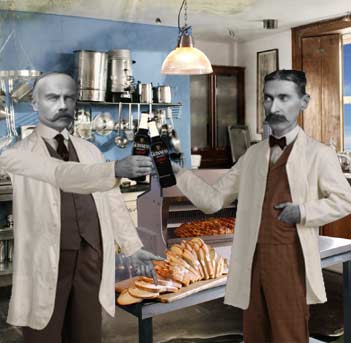 Bobby Jackson just needs to stay in front of Deron Williams. Yes, I know... much, much, MUCH easier said than actually done. Bobby can just get in his head and get Deron to go off on the refs, maybe? It worked last time!

Along with Scola, the missing piece(s) to the puzzle. A year ago, the Rockets started Chuck Hayes and relied heavily on Juwon Howard. Yes, Juwon. Remember him? This year? I think we upgraded massively by getting Scola AND Landry. Landry may not be 100% healthy, but if he's even 90%... and willing to dunk on Boozer's head... well, I'm excited at the mere thought.

A starter last year, and the 7th Man this year. Possibly the strongest man on the team. He can't shoot free throws for his life, but we love the guy. You know he'll do the dirty work and get rebounds. Just do not pass him the ball on the run or in traffic!!!

Yes, I am listing Harris this high. He could be a HUGE factor for us in this series. The guy is a rebounding machine who has a nose for the ball. He has big hops and, like Landry, just wants to dunk on your head. I hope Ricky is willing to use him more. Granted, he can't shoot very well, but this isn't going to be a "pretty" series... those that want it more will decide who wins. All about the hustle and the dirty work. Or in the case of Utah... dirty plays.

Yes, our token white guy shooter dude. I dare you to leave him open, Utah. I double dare you.

The rookie blur. Yes, our rookies are better than your rookies, Utah. Brooks might be an even bigger factor than we thought two weeks ago. Rafer is out, and Aaron may be needed to penetrate the Utah defense. Brooks' increased ability to make long-range shots the last month is just an added bonus!

I do not want to see him enter a game. Ever. Because it means we are down by 20 or more. This is not an option.

Yeah, how awesome would it be for Yao to walk on the court to start Game 7?

These are your Rockets. Ready for some playoff action.

And Tracy? No. More. Tears.