I guess that was a false alarm

Share All sharing options for: I guess that was a false alarm

The rumors of Robert Horry's retirement have been greatly exaggerated...

or he and his team just felt like playing a few more games. 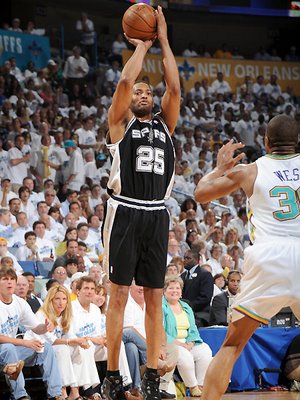 Though as much as I am a huge Horry fan, I was actually hoping CP3 would win and he would be able to match up against Kobe. Now I'm just praying that we aren't subjected to a Detroit/San Antonio Finals again. (Detroit v. Kobe... sure. Boston v. Kobe... even better. Boston v. San Antonio... hmmmmmm.)

I did find it odd that both Steve Javie *and* Dick Bavetta were the refs last night. Javie seems to be the ref at most every playoff game this year. Even though he's the worst referee in the league not named "Violet Palmer."

... let the conspiracy talk begin. David Stern obviously doesn't care. He's not even trying to be subtle about it anymore.