Shane Battier: Being kicked while he's down

Share All sharing options for: Shane Battier: Being kicked while he's down

The NBA released the names of the 2008 "All Defensive Team" this afternoon... as I anxiously awaited seeing Shane's name finally and deservedly included among the members of the First Team. So... what the hell happened?

Look, it was bad enough that Shane wasn't named DPOY to begin with. We all know he should have been the recipient of that award and that it ended up being a consolation prize to KG for not getting the MVP. Fine... but Shane being only 3rd (behind Marcus F'n Camby?) was a total joke. I thought that was the end of it though.

Turns out Shane (just like last year) did not make the First Team.
Naturally, you may ask, if not Shane - then who did make the team?

Look, I am a huge, huge, very huge Kobe fan. I'm not even a Lakers fan and I'm a Kobe fan. That says something, right? And yet, this is absolute bullshit. There is no freakin' way that Kobe Bryant was a better defensive player this season than Shane Battier. No freakin' way. 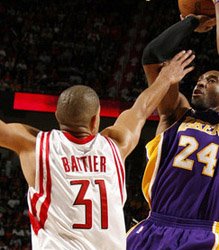 Yes, I realize that Kobe is the MVP and has been first-team all defense a handful of times now. Most of the time he deserved it. And if, say, Bruce Bowen were kicked off the team for being a no-good dirty scrub, I'd be okay with Kobe's selection. But Shane Battier had to be on the First Team. This is two years in a row now that Shane finished top 5 in DPOY and yet failed to make the First Team All Defense. How the hell does that happen?

Hey, just because the Rockets' season may be over doesn't mean I'm not paying attention to all of these undeserved slights of my guys. To all the voters who inconveniently forgot to put Shane's name on the ballot......... you're all ON NOTICE! And whomever voted for Josh Smith to be DPOY, don't think I forgot about you either. Oh, yeah, some ass clown also voted for Tyson Chandler as DPOY. Yes, really.

This biggest insult to injury of all?

It is clear that some of our voters need their privileges revoked. This is a f--king joke. A sick, twisted and altogether unfunny joke at that.