I am here today to announce that there has been an amendment to our aforementioned policy. Beginning immediately, Rafer Alston is no longer the (sole) object of our scorn and criticism. Instead, there is a new mission. That mission being to make the Houston Rockets and the rest of the NBA community aware of one sad, yet undisputed fact:

It hurts to type that. You see, I was quite happy when the Rockets used the 24th pick in 2005 to select the guard from the University of Illinois' runner-up team. He even showed promise early on in his career. He shot 44% from long distance in '07... and we all thought he would only get better. We were all wrong. 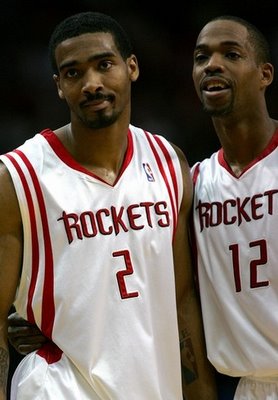 Let me see if I can explain this a different way...

Things Luther Head is not good at (at most any level):
1. Dribbling.
2. Passing.
3. Making a post-entry pass.
4. Making a layup (see Game 5 v. Utah as Exhibit "A").
5. Playing defense against equally-tall opponents.
6. Playing defense against shorter opponents.
7. Not turning the ball over.
8. Decision-making.
9. He's the focus of this blog. Yikes.

I'm not sure I can pinpoint when I gave up on Luther. I think it was official in my mind when I went to the Memphis/Rockets game during the Streak. Luther couldn't make a layup. And I'm not talking during the game... I'm talking during warm-ups!!!! He was missing layups in a layup line! That takes a certain amount of skill I would think. Luther has mastered this.

Of course, the Utah series in the playoffs exposed Luther in the worst way. Adelman couldn't risk even putting him in the game because Luther was destroyed at the defensive end, and he became a liability even on the offensive end. He didn't know when to pass, shoot or dribble. He turned the ball over. He missed open layups. He hesitated to shoot open 3s. It was a shameful exhibition of basketball. I think Daryl Morey knows who to use as trade bait now.

(At least I hope he knows!)

Accordingly, Lee and I had a summit to discuss the issue. The result? Luther Head is the new whipping boy for this blog until the day he is traded, cut, waived, released or in some way no longer on the active roster.

So it has been said. So it shall be.

Disclaimer: The ascension of Mr. Head to "he sucks" status shall under no circumstances be interpreted as or intended to operate as a waiver of any actual or implicit rights to maintain the opinion that Rafer Alston sucks (he still does) or that Rafer Alston has somehow been removed from our s--tlist. He has not.