A few links from some friends of the blog


From Carolyn over at blog Cleveland: Yao's flippin sweet new kicks
I actually really want these, though a 6'3 bald headed white guy wearing these might not work out as well as I think it would in my head. In my head I rock them and I have to beat ladies off with a stick. In real life I'd be a guy with a dragon on his shoe and get looked at funny. 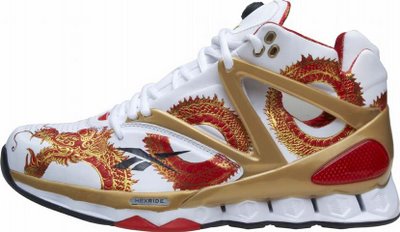 Dave and I are participating in Ridiculous Upside's NBA Mock Draft currently. We pick for the Rockets tomorrow at 8AM. As I write this the following players have been picked:

So, no Rush, no Hibbert, no CDR, no Courtney Lee, and obviously no Augustin (anyone that doesn't think he is clutch isn't paying attention). So, we are kind of stuck with a project/backup center. I think we need a backup center, but if the draft were to really play out like this (it won't) I'm pretty certain we will be trading the pick.

What say you, who would you pick?

Robin Lopez is still there, he has skills, and his biggest deficiency is FT shooting to me, luckily Yao can teach him that
Donte Green is still left and he could be the next Robert Horry, 6’10, plays SF, but he would need to work on his 3pt shot a LOT, he could be an absolute steal this late
Mario Chalmers is a decent college PG, but I’m not sure we will draft a PG, but overall I hate his assist numbers and his A/T ratio even more. I'll pretty much tell you right now we won't be picking him
JaVale McGee I don’t know enough about

And if we have to take one of the Frenchys I'm going to be pissed.