Share All sharing options for: 50% of Yao ... still better than everyone else

The Great Wall has returned, too. Sort of. 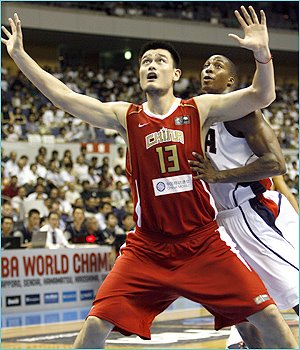 Yao Ming scored 21 points in a warm-up game yesterday. And he did it in only 28 minutes. And he also did it on only 10 shots (are you taking notes, Mr. Donte Greene? You don't have to take 30 shots to get 20 points!!). And he made his free throws (are you taking notes, Mr. Joey Dorsey? No? Well, at least get the stripper to take notes *for you*!).

It's good to have the big fella back. Yes, from everything I have read, he looked rusty and slow and not anywhere near good game shape. And the game was against Angola, who once again did not bring spears with them. Yeah, yeah, that was a terrible joke - and only Charles Barkley can get away with it. I still thought it was funny. Even 12 years later. 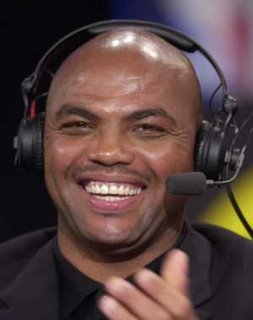 Anyway, within that first link, you'll also see that the other resident Rocket badass, Luis Scola, had 23 points to lead Argentina past Iran. 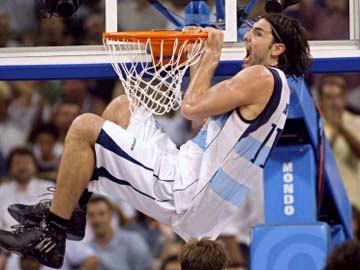 Wait, what? Iran has a basketball team?? Uhhh, okay.

Back to the point though...

Yao is back. And somewhat healthy. At least healthy enough to walk around and make 80% of his shots. I'll take that.

Meanwhile, T-Mac is moping around town talking about "winning" to Stephen A. Smith. Why would you direct complaints to SAS? All he's going to do is twist your words around and yell about it on ESPN or whatever journalistic medium was most recently dumb enough to give him a forum. Furthermore, if you want to win so bad - why would you be so eager to get traded to the freakin' Detroit Pistons? 2004 was a long time ago, dude. That team is old and slow now. And they just signed 2001 Draft Bust Kwame Brown (that's his full name now, by the way). Not to mention they have a rookie coach trying to keep Rasheed in check. Good luck with that.

Teams that are not winning next year include Detroit... apologies to my Pistons fan friends. But not too much of an apology - you guys did distract Shaq enough to win four years ago.

I do think it's funny to see that things have not changed much in the last year. To recap:


1. Yao Ming is a badass.
2. Luis Scola is a badass, too.
3. Tracy McGrady remains the Cowardly Lion.