There are people who doubt Daryl Morey?

Share All sharing options for: There are people who doubt Daryl Morey?

The NBA draft came and went a couple weeks ago... with the Rockets picking up a couple of players likely to contribute in the near future... and a third player who we'll all forget about this time next season. Today marks the true beginning of the Free Agency period. Or at least the "official" beginning to Free Agency.

The Rockets, not surprisingly, have been minor players in this market.
Very, very minor.

So, stumbling around the Chronicle this morning, I saw this interesting little post. Apparently, some people don't trust Daryl Morey to get the Rockets moving in the right direction. More specifically, I saw this quote in Mr. Campbell's column:

"a lot of fans are skeptical or downright pessimistic Morey will deliver. Is that indicative of the sentiment of thinking Rockets fans, or are you willing to wait and see?"

Really? There are legitimate, intelligent Rockets fans who think Morey is not capable of delivering?? Who are these people so I can interview them and expose them as frauds?!? We're talking about Daryl Morey... the man who brought us Aaron Brooks and traded up to get Carl Landry in last year's draft. The GM who shortly after the draft brought us this wonderful image: 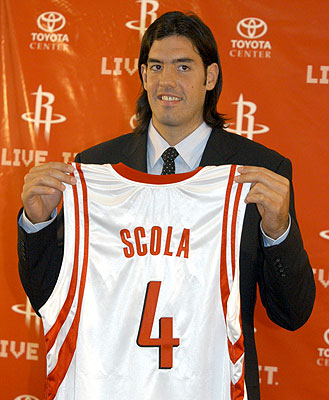 Yeah, Luis Scola is a badass. And he was acquired by a badass GM... and Morey did all this in his FIRST season as GM. In a city where we've had to watch Tim Purpura and Ed Wade destroy the talent level on the Astros, I can't believe there are people out there who question and doubt Morey.

Sure, the T-Mac/Yao combination has yet to produce a playoff series victory. That's more of an unfortunate bit of timing and scheduling than a lack of talent. Does anyone doubt the Rockets would have won at least a couple playoff series if they were shifted over to the Eastern Conference?

Along those lines, what is it that we can reasonably expect Morey to do? The Rockets had the 25th pick this year -- they were actually willing to trade *up* to acquire Donte Greene (according to all reports). Instead, Morey did his homework... traded *down* in the draft... still acquired the player he was targetting AND got more players/picks in the process. That's genius-quality stuff there. I just wish more people noticed and appreciated it!

"How much do you trust the GM who got Landry as a second-round steal — and whiffed on his acquisitions of Steve Francis and Mike James?"

Let's break this down. Francis and James were acquired for next to nothing. We dumped Juwon Howard to get James. And we gave Francis as close to the minimum contract as possible without insulting the guy. They were calculated risks... which didn't pay off exactly. Though we did turn James into BobbyJ, and when Francis was healthy last year he had some very good moments in the 4th Q. One game against the Knicks he practically willed us to victory. And Francis is still on the roster... we have nothing to lose there. It's a complete freeroll.

But I guess the simple-minded fan is just sick of seeing this: 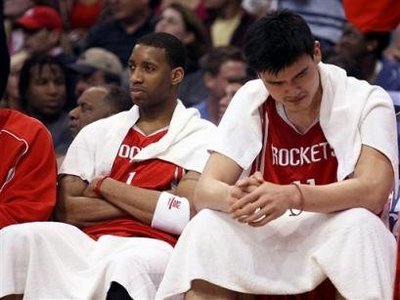 To that I say: be patient. Dynasties are not built overnight. The best transactions are the trades that don't make big headlines. And sometimes the smartest thing to do is to not make rash decisions that decimate the quality and character of a team and have decades-long impacts (see, e.g., Thomas, Isiah - New York Knicks 2003-2008). Our boy wonder GM is like a genius or something. He has given us every reason to believe he is trustworthy. The Rockets are going to make the playoffs barring another unexpected fluke series of injuries. And any "moves" to be done might better be completed in February than in July.

training camp starts in a few months... and I'm certain we will like what we see come November.