Another undefeated February for Rockets?

Share All sharing options for: Another undefeated February for Rockets?

After reviewing the 2008/09 schedule for the first time earlier this week, I wanted to punch the NBA schedule-makers. A straight-shot, right to their collective baby-maker(s). But then I noticed something... as bad as November and April might be, we could see the Rockets taking part in yet another epic month of February. It was kind to us last year... check out this year:

8 home games. 3 road games. Only Dallas and Portland really concern me here. And Dallas is backsliding. Portland is scary, but a healthy Yao can handle a one-legged Great Oden's Raven. At worst the Rockets go 9-2 in February next year. It gets better... here's the three games immediately before February:

Sure, Philly gave us the January Debacle last year. And Golden State is always a bad matchup. But these are home games. And no one is scared about the Knicks.

But, wait... there's more. Here are the three games to begin March:

We are beating Minny and Toronto. And we really, really hate the Utah Jazz. Hopefully Crazy Pills Artest does, too. So let's just chalk that up as a "W" today. Utah is goin' down. Rockets just need to keep their head on a swivel, cause that's what you gotta do when you find yourself in a vicious cock fight. 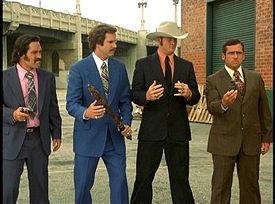 I'm quite sure no one in Utah would be surprised if RonRon tried to stab someone with a trident. But it's okay... the Jazz have it comin'.