Rockets/Jazz - if only the playoffs started TODAY

Share All sharing options for: Rockets/Jazz - if only the playoffs started TODAY

With all the distractions of the Olympics and Rafer's drunken antics, I almost forgot that the Ron Artest trade should be official tomorrow. Which makes me "officially" wonder what the Rockets could have done last year if only we had the services of Crazy Pills during the playoffs.

My conclusion? There is no freakin' way the Jazz would have beat the Rockets in any of the two previous years if we had Artest on the roster. No freakin' way.

Yes, I know, the Rockets have lost to the Utah Jazz the last two years in the first round of the playoffs. Blah, blah, blah. It's not like Utah did anything thereafter. The Jazz are still o-for-forever on NBA Championship rings... 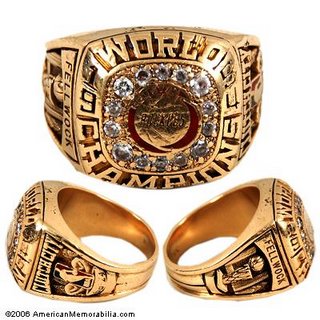 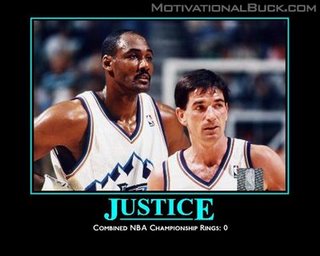 Take a look at the rosters and matchups as they would exist today. Too many people think Utah might be one of the top 2 teams in the West right now. Those people would be wrong.

As of tomorrow, the Rockets roster/rotation will look like this:

off the bench, we'll have the luxury of subbing in:

Which means we could have a 4th Q "finishing 5" of T-Mac, Crazy Pills, Battier, Scola and Yao. Would any team legitimately be able to expect to score more than 20 points in a quarter against that group? Even if the Rockets have trouble scoring on their own (which they won't), they are going to pose defensive matchup nightmares for every team they face. Close games are going to favor the Rockets. Finally.

Though, in the spirit of equal time, here's the rag-tag group the Jazz might throw out on the court next season in their continued effort to offend, insult and bore NBA fans nationwide:

off the bench, the Jazz will have no choice but to turn to:

Ashton Korver, Matt Harpring (pwn3d, bitch!), C.J. Miles and Paul Millsap (unless they also want me to mention Jarron Collins and Brevin Knight, but I'm guessing "no" there).

Hmmm, let's see... starting lineup - definitely favors the Rockets. Major advantages at C and SG overcome Utah's only real advantage - which would be at the PG spot. But since Deron can't play the whole game, the Rockets' depth, size and experience would (and will) overwhelm Utah over the course of any game/series. And don't start with any "Boozer would kill Scola" arguments. Scola is a badass. Boozer is a coward. Scola already has a gold freakin' medal, while Boozer is playing the Christian Laettner role this year for the U.S. squad. 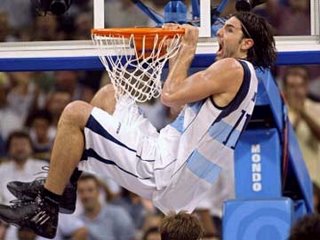 I am so ready for the 2008/2009 season to begin. Rockets v. Jazz, first matchup - Saturday, December 27, 2008 @ Houston. I'll take that belated Christmas gift, thank you very much. Ron Ron will have had 2 months to get acclimated to his new teammates. Correspondingly, the Rockets will have learned how to play as a team by then... uh oh!!!