Yao and China - More people who just don't get it

Share All sharing options for: Yao and China - More people who just don't get it

Things Adrian Wojnarowski is right about:

1. Yao has delivered (he always does)
2. China and the NBA owe Yao a huge debt of gratitude
3. No player has ever entered the NBA with more pressure

beyond that... Mr. Wojnarowski is wrong in just about every conclusion in his article yesterday. His article just reinforces all the improper assumptions people have made about Yao, the Chinese basketball team, and Yao's commitment to playing International basketball.

First and foremost: Yao loves the game of basketball. From every interview, story, rumor, gossip, newspiece - there is no evidence to suggest that Yao feels like he is trapped into doing something he does not want to do. The dude loves playing basketball. Pure and simple.

Second, Yao is not like the American players we are all too familiar with. The Shaquille O'Neals, Tim Duncans and Kevin Garnetts of the NBA may believe they are "above" playing in the Olympics and representing their country. They may believe, rightly or wrongly, that they do not owe their country an obligation to play for the national basketball team. So be it. The difference is that - from all accounts - Yao has an overwhelming sense of national pride in representing China. Especially this year. While I am sure the Chinese would pressure him to play if he felt otherwise, I truly believe that it was Yao's personal decision to speed up the rehab so that he could participate in the 2008 Olympics in his home country. Why should we encourage Yao to set aside his interests in playing for China?

Just because the NBA (and we as fans) might get to see more of Yao Ming in a Houston Rockets jersey if he told the Chinese government to stick it -- that doesn't necessarily mean it's what Yao should or must do.

Yes, I do realize that there is a large chance that the more Yao plays in the "offseason" that it might directly affect his ability to stay healthy during the NBA season. It may altogether shorten his career. That alone, however, is not a reason to tell a man to turn his back on his country. Yeah, the United States might have issues with China's communist stance, its attitude towards human rights and the totalitarian government that supresses many of the rights of its citizens. But Yao is not American. He is not a United States citizen (nor is it likely he ever will attempt to gain citizenship here). We cannot judge him based on our previous notions of foreign basketball players. Yao is Chinese. And a proud representative of his country. 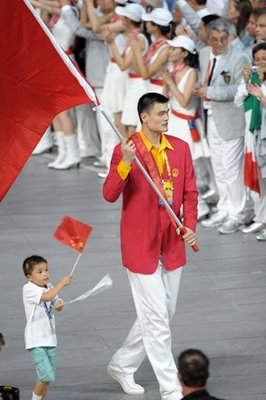