With training camp about to begin, there is one primary question associated with the Rockets. No, that question is not "will they ever get out of the first round?" because we know the answer to that is "hell yes, and this year in fact!" Instead, the real question is "who starts at small forward for Houston this year: Shane Battier or Ron Artest?"

Let's face it, the Rockets would not have acquired Ron Artest if we didn't consider there to be at least some sort of a weakness at the small forward position. Shane Battier is great at what he does - which is defend the opposing teams best non-center while staying out of T-Mac and Yao's way on offense. The problem is that this supposed strength is great for the Rockets when they are on the defensive end, but it slows down the offense. SI.com's Marty Burns discussed this exact dilemma today:

The skinny: Don't assume Artest will just step into the starting lineup. Battier is a valuable cog as a long-armed defender and three-point shooter. He also does a lot of other little things that complement Tracy McGrady and Yao Ming. Houston coach Rick Adelman might be reluctant to tinker with success, and instead opt to use Artest off the bench as a sparkplug and scorer much the way the Spurs do with Manu Ginobili. (At the end of games, Adelman can always use Artest and Battier on the floor with T-Mac as the principal ball handler). Artest, by the way, has said he would accept a reserve role.

Here's my concern with Burns' conclusion - yes, the Rockets have seen "success" using Battier as the small forward. But only in the regular season. Come April and May, the offense historically suffers dramatically. This is precisely why the Artest trade was made. Further, even the Spurs typically end up using Ginobili as a starter in the playoffs. Why? You play your best five guys as much as you can for as long as you can. That's what wins in the NBA. Lastly, while Artest says he would accept a reserve role, by December it would probably irritate him to see Shane continue to be a relative non-factor on offense. The last thing the Rockets want is an irritated Crazy Pills. Let's try to avoid this.

Meanwhile, because it is Ron Artest we are talking about... why not have a WWE-style Battle Royale to determine the training camp winner? Shane Battier is basically the whitest non-white dude there is, so I'm almost certain he watches professional wrestling. This could be awesome. Artest diving off the top rope to finish off Battier... only for Battier to be playing possum and roll away from the flying elbow... 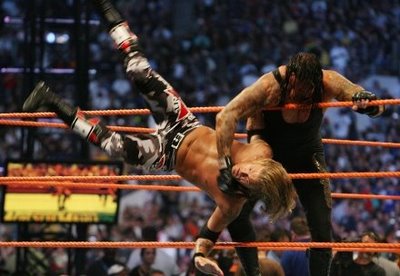 Okay, yeah, it's clear I need the NBA to start. As soon as possible.