Hello again, everyone! Based on the surprising success and popularity of our last celebrity installment - the network has demanded that I host another edition of "I Know White People"!! [audience cheers wildly - Chuck Taylor mutters "damn you, Chappelle!" under his breath]

For those of you who still do not recognize me, my name is Chuck Taylor and I'll be your host this evening! [audience golf clap]

Again joining us today are members of the professional basketball team from the City of Houston - the Rockets! Today's contestants are Ron Artest, Brent Barry, Joey Dorsey... and our returning champion, Mr. Shane Battier!

Good evening, Mr. Taylor! It's nice to be back!

We're getting paid? Sweeeeet. Can I get mine in $1 bills?

Now, contestants, as I hope you are aware, the purpose of today's contest is to see which of you best knows the habits and tendencies of pigment-challenged Americans. As always, the questions will explore pop culture, slang and stereotypes commonly associated with Caucasians like myself. Let us once again find out which of you best knows white people, shall we?

It wasn't me. Hey, Chuck, did you know I'm a recording artist, too? I have a new album coming out. Tru Warier records! Look for me... I'm a rapper! I'd never name no song "Achy Breaky Heart" though. That shit sounds gay.

Yeah! That sounds weak. Unlike my dunks - which are nothing but strong!

Bitch, please - no way your white ass can dunk.

[rolling his eyes] Yes, Mr. Barry, I believe you, but I need an answer to the question. How about you, Shane? Do you know?

But of course, Chuck! The song "Achy Breaky Heart" was originally performed by the Marcy Brothers, but was later re-recorded and made famous by Billy Ray Cyrus for his 1992 album "Some Gave All". Some would say it is his signature song.

Wait... did you say "Cyrus"? Like that Miley Cyrus chick I saw some half-naked pictures of on the Internet? Best $19.95 I spent that month. Teenagers today are crazy cool! I love the Internet.

Thanks for sharing, Mr. Barry. Please never do that again. Ever.


Now, for our next question:
Who was the first winner of the TV show "Dancing with the Stars" in the U.S.?

Someone say "dancers"? Cool, I needed a lap dance. Here's $20! Put on some music Chucky! And where are the girls??

Rookie gets no nookie!! Shut the fuck up and go get me a sandwich, chump!
[Joey Dorsey slowly walks off the set with bug eyes]

Ummm, wow. Mr. Artest you are starting to scare me. Shane, is it possible you know the answer to this?

Certainly, Mr. Taylor! While the United States was not the first to air "Dancing with the Stars" the first winner in this country was a soap opera star named Kelly Monaco. Her partner was Alec Mazo. There was actually some controversy.......

Yeah, there's controversy - cause that chick ain't famous for bein' on a soap opera. No, I've seen that chick naked on the Internet. A lot!! Thank you, Hugh Hefner! I love you, man!

Mr. Barry, please don't interrupt. And keep your hands where I can see them! Nonetheless, Shane - that is correct!!

[runs back onto the set with Ron Artest's sandwich] Yo, that girl could dance for me any day! I might even give her $40!

[looks at sandwich]
Bitch -- this has mayonnaise on it!! The fuck is wrong with you, rookie!?!

Mr. Artest, please, can we try to focus on the show? Please??? Anyway, uhh, yeah, let's just go to the next question.


Our third question today:
What 1975 movie parodies King Arthur's court and a search for a chalice of spiritual importance?

A chalice? Sounds like a pimp to me! It's good to be a King. Just not a Sacramento King. On that note, I certainly wasn't paid like a King when I played for the Kings. Do you see the irony in that, Chuck??? Do you?!?!

No, no I don't Ron. I have no idea what you are talking about.

I was once king of the Slam Dunk competition... true story. Really.

I get treated like a king every time I go to the club. VIP and stuff. The girls love the J-Train. I got a room named after me in Memphis and everything!

I give up! Shane, do you know the answer?

I think I do, Mr. Taylor. Are you referring to the movie Monty Python and the Holy Grail? I love that movie. John Cleese always cracks me up. I keep trying to get Dikembe to watch it with me...

nah, Dikembe's too busy showing me the ropes -- if ya know what I mean. And by "ropes" I mean he's taking me to every club in Houston and announcing "Who wants to sex Mutombo?" I've tried to say "Who wants to sex Dorsey?" but Mutombo hit me with an elbow last time I did that. At least I hope it was his elbow.

[hangs head in shame]
Shane... your answer is correct. And now, before I kill myself, I'm going to ask one more question of the group.


Tonight's final question:
Who is this man? 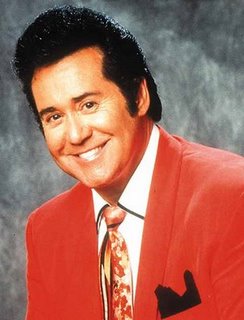 That mo-fo looks like Santa Claus got a dye job!

Yo, playin' Santa Claus is fun... every Christmas I get every girl to sit on my lap. And I give 'em exactly what they want. Even if they say "no"... 'cause you know they mean "yes"!

Is that our head coach?

No, wait, is that the Monty Python pimp you were asking about earlier?

[muttering to himself]
yeah, gotta keep them ho's in check with my pimp hand...

Actually, guys, that's Wayne Newton! You know, "Mr. Las Vegas"! He's an icon! He is the epitome of coolness! I love that guy!

there is nothing even remotely cool about that ugly mo-fo.
The fuck is up with his hair?

Oh, man, Las Vegas! Now there are some dirty girls out in Las Vegas! Me and Coach Cal once had a crazy night out there... And the only gambling I did was whether I'd be gettin' some nasty disease after picking a skank outta that lineup of options at the Bunny Ranch!

Now, Joseph, you've got to treat women with more respect than that. Especially now that you are a professional athlete and represent Houston!

Yo, if I weren't a professional athlete there's no way I'd be able to keep up with them girls. And now I can finally afford the champagne room. Damn I'm gonna love Houston!

Ahhhhh, enough! That's it. I can't take it anymore. I need a shower.


Shane Battier, after correctly answering all four of tonight's questions, you are once again the winner of "I Know White People"!! Congratulations!

However, because the FCC is going to probably fine us a few hundred thousand dollars for even considering having Mr. Artest and Mr. Dorsey on this show, we didn't have much money for prizes. So, please enjoy this used DVD of Season 1 of "Three's Company" and may I never, ever have to host a game show again. Ever.

[Chuck storms off the set]

Oh, yeah, the buffet starts soon!
Chris Rock was wrong - titties and tater-tots DO mix. And I like it!