Yao = Ewing Theory?!? I am not letting you get away with this, Simmons!

Share All sharing options for: Yao = Ewing Theory?!? I am not letting you get away with this, Simmons!

I had meant to write a reaction/commentary piece on this over the weekend.  Problem is, my rage still has yet to subside.  FU, Sports Guy.

My retort... after the jump.

Now, I need to make something clear:  I do not enjoy fantasy basketball all that much and I haven't attempted to play since I was in college.  Which was a long, long time ago.  That said, Simmons can rank players however he wants, but the sometimes backhanded analysis he gives to Yao, Tracy and RonRon is beyond objectionable... at least as far as it applies to their actual ability as basketball players.

An example, from his comments on Ron Artest:

Going from a pressure-free "Go ahead, shoot any time you want, we suck anyway" situation in Sacramento to "We need you to give us defense and intensity and maybe even play power forward when we go smallball, and by the way, if you screw up or have a meltdown, our much-anticipated title run is screwed" in Houston. I'm a little dubious.

Things I have problems with here:  (1) Artest has given nothing but "defense and intensity" ever since he's been in the league.  The problem is sometimes he cares too much and that's why he flips out.  (2) If Artest screws up or has a "meltdown" - it's not like the Rockets are screwed.  He's in a contract year, playing for his self-proclaimed favorite coach, and he's on a team that is going to win at least 50 games with or without him.  (3) What "much-anticipated title run"?  As much of a homer as I am, it's not like the Rockets have won a playoff series in the last decade.  Artest can't screw up a title team if the team hasn't made it out of round 1.

Of course, Simmons is still the guy who thinks Yao Ming was a bad pick at #1 overall in 2002... and speaking of Yao:

Furthermore, to compare Yao to Manute, Muresan and/or Bradley is ridiculous.  Unless Simmons wants to expand the list to include Rik Smits, Mark Eaton and/or Ralph Sampson??  Simmons once joked that Yao is the equivalent of Rik Smits (he was wrong - check the stats.  Yao's worst season is 20% better than Smits' best season ever.).  The NBA has never seen anyone of Yao's size, skill and ability.  You can't compare him to anyone.  And I never saw Mark Eaton be the designated free throw shooter for the Jazz.

You can't guarantee or predict anything about Yao's future.  That's the beauty of Yao - no one knows.  Even if Yao had to retire today, he'd still forever be a badass.  Yes, Yao is returning from February foot surgery.  He was never fast to begin with.  But Yao doesn't need to be fast.  He doesn't even need to be quick.  I can't wait until Yao plays the Celtics on November 4th and blocks 7 shots.

I swear, if Simmons tried to taunt me about Yao... I'd never be replying "white flag"!

As for Tracy McGrady?  Simmons doesn't even try to give a logical analysis:

Beyond last season's statistical drop and his nasty habit of missing 11-16 games every season, T-Mac is already battling various injuries and turns 30 this season. He's also playing for a deep team that doesn't really need him until April. Too risky.

I realize Simmons' analysis is for fantasy purposes only, but his last "reason" is unnecessarily conclusory.  The Rockets *need* T-Mac.  They need him now.  They need him in February and they need him in March, April, May and June.  (Even though McGrady tends to do a David Copperfield impression and disappear every May...)  Sports Guy apparently forgets the Rockets play in the Western Conference, where 50 wins might not be enough to get you to the playoffs.  And in the last 4 years, the Rockets have not fared well in McGrady's absences - though they were much better last year.

I expect McGrady to miss 10-15 games, yeah, but the suggestion that the Rockets are already deep enough and don't need him is preposterous.  Daryl Morey has specifically built a team to suit McGrady's needs and skills.  With Ron Artest's personality in the locker room, McGrady may even be afraid to take days off now unless he's truly injured (and I say this hoping to God that his shoulder and knee have healed enough to no longer be "injuries" I have to worry about!!!!)

The Rockets need McGrady... badly.  He does things only LeBron can do in the half-court.  And yes I am intentionally leaving Kobe out of that group.  And I'm a Kobe fan!!

Now... it's not all bad for the Rockets.  Simmons does give some props to the other resident badass, Mr. Luis Scola.... sort of.

Then again, in May SG's going to have to explain this:

And, yes, the fact that I gave Houston's three best guys "Watch out!" status should give you an idea of how I'm feeling about the 2008-09 Rockets.

Let me get this straight... last year the Rockets win 55 games in the most difficult Western Conference of all-freakin'-time... at one point 22 in a row... and that's with Yao and T-Mac missing major parts of the season... no reliable third scoring option... 3 rookies as key contributors... and a new coach...  ???  And somehow we're going to be seen as a disappointment this year?  No way.  Not buying it.

The Rockets are loaded.  They may start slow this year.  But they are going to be a top 3 team in the West by the time April gets here.  FU, Sports Guy.  Consider yourself ON NOTICE (again). 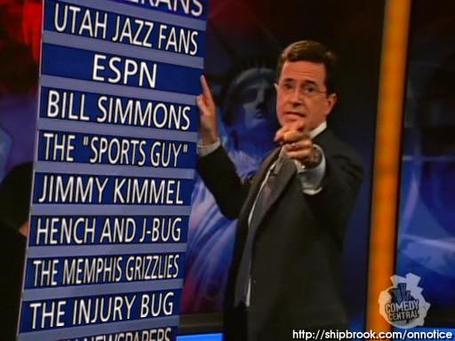