Christmas in October: It's Opening Day!!

Share All sharing options for: Christmas in October: It's Opening Day!!

The last time the Rockets played a game that counted (Game 6), I finished the night downing multiple jager shots and doing other things I most definitely regret.  A lot.  Damn those Utah Jazz!  They have driven me to drink........ more.

The Rockets face what might be the worst team in the NBA, the Memphis Grizzlies.

Since Lee has already given a preview, here are 10 things to look for this season with the Houston Rockets and around the NBA:

1.  Ron Artest will prove to be the single-most important acquisition by any NBA team this past offseason.  Artest won't average 20 points a game, but it's not inconceivable to see him average 16 points, 5 rebounds and 4 assists - plus his trademark lock-down pit-bullish defense.  Every night.

2.  Houston will win at least 59 games and go undefeated in February.

3.  Yao Ming will return to be a complete and total badass.  We'll forget about his offseason foot surgery by December.

4.  CP3 will continue to be better than Deron Wiliams.

5.  Chauncey Billups will continue to be the most overrated player in the NBA.

6.  Luis Landry will average 23 points, 14 rebounds and a couple of monster dunks per game.  (And any use of the lame-ass term "Carluis Scolandry" will subject most anyone to a ban on this blog.) 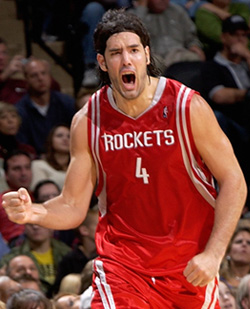 7. Tracy McGrady will sulk to the media sometime in January.  Ron Artest will not stand for it.

8. Rafer Alston will not be a weak-link and will prove many wrong.  (Okay, I only kinda sorta believe this.)

10.  The 2008/09 Houston Rockets will win their first playoff series in a decade on their way to the NBA Finals.

NBA Finals:  Rockets v. Celtics
NBA Champion:  Houston Rockets
MVP:  LeBron (not because he is better than Kobe though)
ROY:  Michael Beasley
6th Man:  Lamar Odom (though he won't be happy about it)
comeback POY:  Yao Ming (if he doesn't qualify, then Shaun Livingston)
Executive of the Year:  Daryl Morey.  Of course.