The Rockets are 1-0.  Which we all expected considering the opponent...

1.  Artest showed in his debut that he is exactly what we expected when we made the big trade this summer.  16 points, 3 rebounds, 2 assists and 3 all-important steals, including 2 to start the game.  Artest played great defense on Rudy Gay (who made some extremely difficult shots with Artest right in his face).

3.  Luis Scola can rebound anything and everything in his sight.  12 points and 13 rebounds in only 25 minutes of game action.

4.  The Rockets can play some very, very solid defense.  Memphis never scored more than 20 points in any quarter and shot only 38.3% for the entire game.

5.  The Rockets won - and this is the important part, right??

1.  Luther Head.  Yeah, the boxscore says he was 2-4 from the field.  It does not show his tentativeness, lack of decision-making ability, bad floor spacing and the equivalent lack of trust from his teammates.  Those were 12 brutal minutes Luther Head played.  Brutal.

2.  T-Mac is already three-point shot happy again.  I thought he learned his lesson last April/May.  I guess I was wrong.

3.  Scola's playing time.  WHERE THE HELL WAS LUIS SCOLA IN THE 4TH Q?  He only played 25 minutes....... and never saw action in the fourth quarter.  Even though the Rockets could not get a rebound.  Even though poor Carl Landry and Chuck Hayes could not buy a basket.  It's not like Scola was tired.  I have no problem with Landry playing 22 minutes.  I also have no problem with Chuck playing 10 minutes.  But not at the expense of Scola losing playing time.  No.  I refuse to accept that as an option.

4.  We don't get to play Memphis every night.  Therefore shooting 36% for the game is just not acceptable.  At any time.  Fortunately Yao can shoot free throws still.

5.  Getting out-rebounded by Memphis is shameful.  Then again, the one guy who was able to rebound wasn't allowed to play (care to explain, Rick Adelman??).

Holding Memphis to 0 three-pointers made is kinda cool.

Clutch 3 at the end there, Rafer.  Very clutch.

Luther Head does not.

I like the Rockets depth, but a lineup of Artest, Barry, Head, Chuck and Carl Landry is not the best way to use it.  And this was the lineup we used for a majority of the 4th Q.  Yikes.

Welcome to Houston, Ron Artest.  I expect a lot more of this: 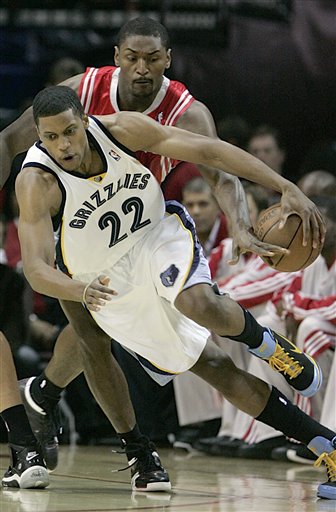