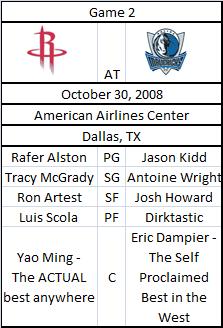 What you are seeing above, with Dallas’ all time record, and record against the Rockets, is that the Mavericks suck all time.  What you aren’t seeing is that they 21-9 in their last 30 against us.  I didn’t have the heart to see what their home record in that span is against the Rockets, but I know it is good.  What does that mean for the Rockets this year?  Nothing really, though it can’t completely be ignored.  That record goes back to 2004 and includes the playoffs when the Rockets were Donaghey’d out of them.   The Mavs have owned us, and Tracy McGrady and Yao Ming certainly know that.   I think late in some of the games it has gotten in Tracy’s head especially.  Obviously I don’t know that, but it just appears evident on the court.  This year is new though and Ron Artest doesn’t care what happened yesterday, much less over the last 4 years.  He’s the difference maker in this series and I think he and McGrady will take turns on Josh Howard and Dirk Nowitzki and ultimately will shut them down.

Alston vs. Kidd – I’ll be honest, I’ve never really liked Jason Kidd.  That said, he is one of the top 10 PG of all time and a surefire Hall of Famer.  Rafer Alston is not.  But I think what last nights game taught Dave and proved to me is that Rafer is quite possibly one of the 5 best fits in the league for this team.  When he has his head in the game, he doesn’t make poor passes and his handles are exceptional.  If he can limit his shooting and just run the offense, this team will get better and better.

ADVANTAGE: Mavericks - Jason Kidd gets the check mark here but I wouldn’t be surprised if Rafer is the more important player tonight and if next go round I put the mark in his box.

McGrady vs. Wright – Seriously guys, I try not to put any Longhorn bias out there, I love my Aggie friends (with the exception of delusion about football teams they are some of the best people I know), but this is an Aggie basketball player, that alone would give the Rockets the advantage.

ADVANTAGE: Rockets - Tracy McGrady is simply better, and by a lot.  Wright is still young and is honestly getting better.  I wish him luck, he’s going to need it tonight

Artest vs. Howard – Josh Howard was one of my favorite players in the league, but I haven’t seen the growth that we saw in his first couple of seasons that I expected.  He’s still a good player, but he should be a great one right now.  After watching Ron Artest last night, I finally got just how strong he is.  The guy can manhandle just about anyone in the league.  He’s also one of the funniest looking runners I’ve ever seen, his trot is a thing of hilarious beauty.

ADVANTAGE :  Rockets – Artest is better in just about every phase of the game.  That doesn’t mean Josh Howard isn’t very good, so Mavs fans, drop that argument.

Scola vs. Nowitzki – Luis did exactly what I wanted him to against the Grizzlies, he was dominating on both ends.  Sadly, Adelman decided to not play the hot hand game I hoped he would, and he didn’t get the 20 rebounds he should have pulled down.  Dirk is the best tall shooter I’ve ever seen.  His ability to get his shot off is remarkable and his ability to get open isn’t exactly subpar.

ADVANTAGE: Mavericks – Luis is good, Dirk is great, it’s no shame to not be as good as Dirk

Yao vs. Dampier – Yao is the best center in the league, other than the Jazz, there is no team in the league that really poses him any problems.  Every single game he will have the advantage head to head here.  Eric Dampier isn’t one of the top 10 centers in the league.  I have no idea what got Eric Dampier to think he was the best in the West, but I’m guessing he regrets saying that now.

Bench – With Battier and Brooks out, Dallas’ bench of Stackhouse and Barea and most importantly, Terry is better.

Overall, when healthy, the Rockets are clearly the better team to me.  There is no team in the league that the Mavericks can’t beat, and I think they could be better with Carlisle than with Johnson.  However, much like at the beginning of last season with the Rockets and Adelman, I think they will struggle a bit to get Carlisle’s offense down.